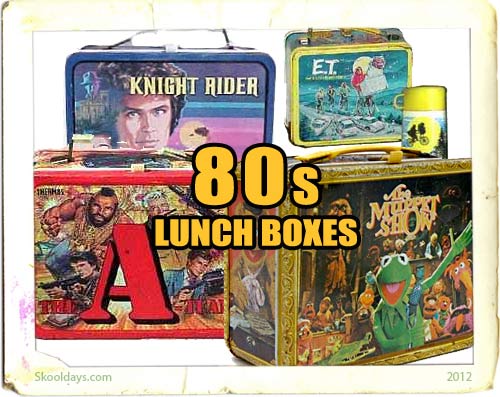 The ban on metal lunchboxes goes national, and in 1985, Rambo is the last metal lunchbox ever produced. Character licensing is still riding high, and any television show that appeals to children is fair game for fodder – lunch, that is. The Dukes of Hazzard, The A-Team and Knight Rider all get the lunchbox treatment. Saturday morning television, kept alive by the popularity of Smurfs and subsequent like-minded kidvid, continues to dominate lunchboxes from Care Bears to He-Man. But lunchboxes also begin the long slow journey into night. No longer the barometer of children’s lives, lunchboxes generally cease to feature fads and trends and instead exist strictly to promote television, films, music and companies such as McDonalds and Campbell’s Soup. The transition into plastic also lowers the value of boxes for collectors, as the artwork and design become less and less sophisticated.