You are in: Home > Whodunnit?

In the 1970’s a great panel detective type series took place on ITV called Whodunnit.Introduced with a pilot episode on August 15, 1972, Whodunnit? officially premiered on June 25, 1973, remaining on the air until 1978

It was introduced, and hosted, by John Pertwee and ran 3 seasons from the early to mid 1970’s. Patrick Mower and Liza Goddard were also among the regular members of the panel.

The rich voice over came from Wiliam Franklin 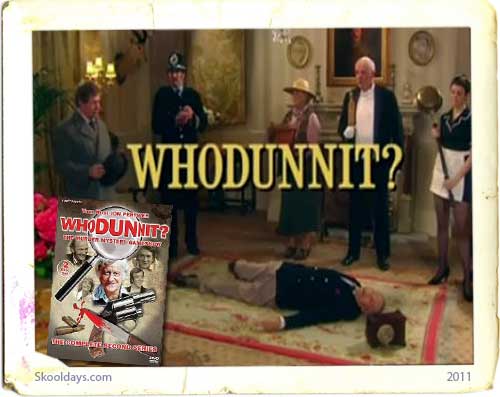 Originally Edward Woodward hosted the first series. The concept was simple, a mini drama of 15 minutes takes place where clues and red herrings are left for you to pick up. the settings varied – i remember one taking place in a spaceship,of course Jon Pertwee being an ex Dr Who couldn’t help himself and putting his tongue in his cheek, Pertwee remarked: “In case you think, you’ve seen me here before, you haven’t. I never visited this place on my travels!”. So the settings were quite diverse from week to week.

You had to really concentrate to catch all the clues that are dropped in, it wasn’t always the butler or the maid! Once the sketch had finished with a murder then the cast were questioned by the Whodunnit panel.At the end of the questioning the Panel would make there decision and then John Pertwee would say the immortal words….Will The Real Whodunnit Please Stand Up? 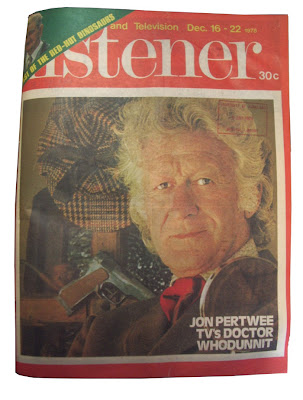 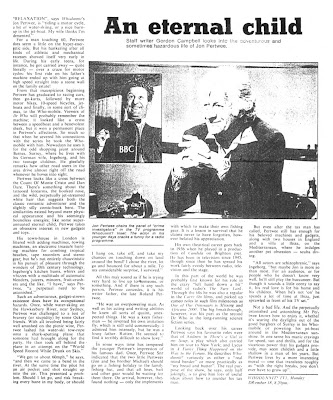 Script:
“RELAXATION”, says Whodunnit’s Jon Pertwee is “riding a motor cycle, a bit of water-skiing, or a nice burn-up in the jet-boat. My wife thinks I’m demented.”For a man touching 60, Pertwee does seem a little on the hyper-energetic side. But his hankering after all kinds of athletic and mechanical excesses showed itself very early in life. During his early teens, for instance, he got carried away – quite literally – over a craze for motor cycles: his first ride on his father’s machine ended up with him going at high speed straight into a stone wall on the family estate!

From that inauspicious beginning Pertwee has graduated to racing cars, then go-karts, followed by more motor bikes, 10-speed bicycles, jet-boats and finally, in some sort of climax, to the Who-mobile. Viewers of Dr Who will probably remember the machine; it looked like a cross between a speedboat and a benevolent shark, but it won a permanent place in Pertwee’s affections. So much so that when he severed his connections with the series he took the Whomobile with him. Nowadays he uses it for the odd shopping jaunt around Barnes, Surrey, where he lives with his German wife, Ingeborg, and his two teenage children. He gleefully remarks how other road users in the area drive almost right off the road whenever he hoves into sight.

Pertwee looks like a cross between the Count Of Monte Cristo and Dan Dare. There’s something about the tattooed forearms, the hooked nose, and the wild, perpetually jet-streamed white hair that suggests both the classic romantic adventurer and the slightly silly comic-book hero. The similarities extend beyond mere physical appearance and his seemingly boundless energies; like some superannuated eternal child, Pertwee takes an obsessive interest in new gadgets and toys.

His town-house in London is littered with adding machines, rowing machines, an electronic treasure hunting machine for combing tropical beaches, tape recorders and stereo gear; but he’s not entirely chauvinistic in his pursuit or pleasure through the wonders of 20th century technology. Ingeborg’s kitchen hums, whirrs and whizzes with a multitude of automatic blenders, juicers, mincers, fruit-crushers and the like. “I have,” says Pertwee, “a perpetual need to be astonished.”

Such an adventurous, gadget-strewn existence does have its occupational hazards. Once, while water-skiing on the Hawkesbury River, near Sydney, Pertwee was challenged to a test of bravery (or stupidity) by some Ocker friends. With all involved being fairly well smashed on the picnic wine, Pertwee lashed his water-ski tow-rope onto a shark-spotting plane that someone had brought along for the party. He then took off behind the plane in an attempt on the “World Speed Record While Drunk on Skis.”

“We got to about 60mph,” he says, “and then we came to a bend in the river. At the same time the pilot hit an air pocket and shot straight up into the air. This presented a problem. Should I let go, and risk breaking every bone in my body, or should I hang on, take off, and take my chances on touching down on land around the bend? I chose the river, let go and bounced for about a mile. To my considerable surprise, I survived.”

All this may sound as if he is trying very hard to live up to someone, or something. And if there is any such person, Pertwee concedes, it is his writer father, the late Roland Pertwee.

“He was an overpowering man. As well as his acting and writing abilities he knew all sorts of quaint, unexpected things. He was a keen fisherman – he invented his own imitation fly, which is still sold commercially. I admired him intensely, but he was a lousy father. Rotten. He seemed to find it terribly difficult to show love.”

In some ways time has tempered the younger Pertwee’s impression of his famous dad. Once, Pertwee Snr indicated that the two little Pertwees (Jon and his brother Michael) should go on a fishing holiday to the family fishing hut, and that all lines, bait and other gear would be waiting for them there. On arrival, however, they found nothing – only the implements with which to make their own fishing gear. It is a lesson in survival that he claims never to have forgotten, however belated his appreciation.

His own theatrical career goes back to 1936 when he played in a production of Candida on Brighton pier. He has been in television since 1945, though since then he has spread his work fairly evenly between radio, television and the stage.

In this part of the world he was probably first known for his role in the crazy “left hand down a bit” world of radio’s The Navy Lark. Through the 60s he was also a regular in the Carry On films, and picked up cameo roles in such film milestones as One of Our Dinosaurs is Missing and Africana 2000. The big breakthrough, however, was his part as the second Dr Who in the long-running science fiction series.

Looking back over his career Pertwee says his favourite roles were that of Andrew in There’s a Girl in my Soup, a play which also carried him on tour to New York; and Lycus in A Funny Thing Happened on the Way to the Forum. He describes Whodunnit? variously as either “a real mind bender” or more practically as “my bread and butter”. The real purpose of the show, he says, only half jokingly, is to give him lots of useful ideas about how to murder his tax man.

But even after the tax man, has called, Pertwee still has enough for his, beloved machines and gadgets, along with two houses in England and a villa at Ibiza, on the Mediterranean, where he indulges another pet obsession – scuba diving.

“All actors are schizophrenic,” says Ingeborg, “but maybe Jon is more so than most. For an audience, or for people who he doesn’t know very well, he’ll still play the buccaneer. But though it sounds a little corny to say it, his real love is for his home and, his children. When he’s not ‘on’ he spends a lot of time at Ibiza, just sprawled in front of his TV set.”

Not a bad life. And the perpetually astonished and astonishing Mr Pertwee knows how to enjoy it, whether it’s scaring the daylights out of the good burghers of Surrey in his Whomobile or powering his jet-boat around in the Mediterranean sunshine. In one sense his manic cravings for speed, sun and thrills, and for the vicarious power that his gadgets provide may seem childish and a little shallow in a man of his years. But Pertwee lives by a more interesting moral – one that translates roughly as “with the right breaks, you don’t ever have to grow up”.

Jon Pertwee chairs the panel of “crime investigators” in the TV programme Whodunnit? Inset: The actor in his younger days cracks a funny for a radio programme.