You are in: Home > Let’s Have Fun (Chuck McCann Show)

In the fall of 1960..entertainer:Chuck McCann..who had already established himself as a successful comedy performer and puppeteer on such local NYC based kids tv shows as”The Puppet Hotel”(Saturday mornings on WNTA TV Ch.13 in the Newark,N.J./NYC viewing area November 28,1959 to January 16,1960) and Laurel & Hardy & Chuck (Weekday afternoons and Sunday afternoons on WPIX TV Ch.11 in NYC Wednesday September 7,1960 to Friday December 29, 1962 Sunday October 14,1962 to Sunday December 31,1962) was asked by the station execs at Ch.11 to create,produce and host a comedy/variety kids tv show for the station’s Sunday morning schedule. 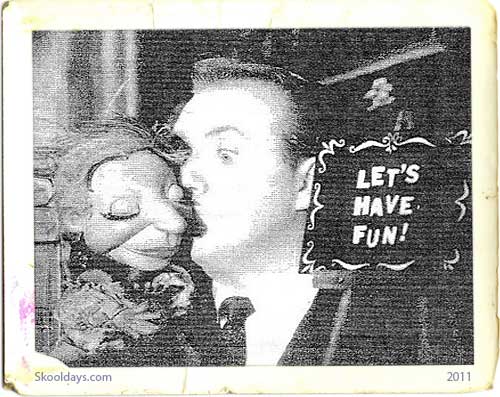 Working with his head puppeteer and comedy asistant:Paul Ashley..the two men created a series that featured character comedy and puppets skits that were wrapped around reruns of old movie cartoons,comedies,serials and reruns of old tv series”The Adventures Of Superman” and”The Abbott & Costello Show”.

“Let’s Have Fun”debuted on September 18,1960..and it quickly became one of NYC’s most popular and long running programs.Set against the backdrop of an old vaudeville theater that was turned into a tv studio.

The Paul Ashley puppets would perform comedy skits and lip sync to popular songs of the day..they would also engage McCann in comedy banter inbetween the reruns of the films and the promotions of the sponsors.

McCann would also do lead ins for the reruns of the Universal and Republic movie serials and he would interview guest performers and personalities..who would visit the show.Rudd Weatherwax brought his dog “Lassie”and some kids to the set,The Duncan Yo Yo champs would show their skills and cartoonist Al Kilgore would draw “Bullwinkle”for the viewers.

McCann and Ashley would also perform comedy skits that would spoof old movies and in 1962..when NYC was besiged by another Newspaper strike. The pair would perform sketches that parodied the New York Sunday News comic strips.

The series was also the first NYC based tv series to feature reruns of “The Mack & Myer For Hire”tv film comedies that starred:Mickey Deems and Joey Faye.

McCann and Ashley would continue to mc”Let’s Have Fun”..until they were forced to leave Ch.11 following the sunday morning August 15,1965 broadcast..Ch.11’s resident kids tv wraparound host/peformer:”Capt.Jack”McCarthy would mc the program from sunday August 22,1965 to August 28,1965.

In the interim..the station execs at Ch.11 hired a talented and creative entertainer and director from Chicago Terry Bennett to become the series new mc.

He changed the backdrop of the show from a vaudeville concept to a traveling circus”The Fun Fair” and took on the characterization of a ringmaster.

The guests who appeared on the show were the editor and publisher of a magazine on UFOs and movie serial actor:Buster Crabbe(The movies “Flash Gordon” and”Buck Rogers”).

Bennett would continue to host”Let’s Have Fun”..until he left the series in the fall of 1966. The format would change again..to a gentle comedy puppet concept and Hank Stohl (Who had finished his stint as the mc of”Hank Stohl Presents”on Ch.11) would introduce reruns of”Popeye”cartoons..while trying to surpress the antics of The Tom Tichenor Puppets and child actor:Robert Broderick.(The backdrop for The Hank Stohl puppet concept was set against the living room of Mr.Stohl’s private home)

Stohl mc the program for a few weeks..but when he saw that the station execs were getting rid of the kids tv hosts..he left Ch.11 and he was replaced by Bill Biery.

In the fall of 1964..he brought his zany South Seas hermit character to NYC youngsters and he had a modest ammount of success with the show on WPIX TV.

The gentle puppet format was not as successful and it was quickly dropped..for the remainder of his tenuire with the show..Biery revived his”Beachcombe Bill”character and he would entertain and inform a studio audience of kids against the backdrop of Biery’s south seas hut.

On Sunday September 10,1967 former WPIX TV Director’ and cameraman:Scoey Mitchell became the sixth and last host/performer of “Let’s Have Fun”..working against the backdrop of an inner city fire house.

Mitchell would take on the persona of”Fireman Frank” and he would entertain and inform a studio audience of children..who would visit his fire station set.

“Fireman Frank”would continue to mc “Let’s Have Fun” ..until the station execs at Ch.11 closed down the fire house following the sunday June 2,1968 broadcast.