You are in: Home > The Eddie Lawrence Show

Seeing the success of comedy performers..who were able to entertain adults,teens and kids with their characters and skits on shows on competing stations.

The station execs at WPIX TV Ch.11 in NYC decided to create,produce and present a trio of comedy programs that they hoped would appeal to a mass audience.

Along with “The Chuck McCann Show”  and “The Mighty Hercules Cartoon Show” (Then mc’d by horror show host/performer John Zacherley “The Cool Ghoul”)..Ch.11 created a format for zany comic/character actor/mimic/scriptwriter and producer:Eddie Lawrence. 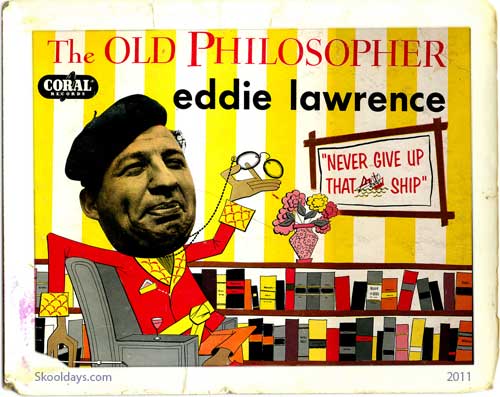 The Eddie Lawrence Show with The Chuck McCann Show

A vetrain of radio,nightclubs and legitimate theater.Lawrence also made guest appearances on numerious tv variety shows and he cut, produced and recorded many comedy discs that appealed mainly to an adult audience.

He also did voice overs for The Paramount/Famous “Modern Madcap” movie cartoons..where he did the voices for”Swifty & Shorty”(Later on the characters’ names were changed to “Ralph & Percy”)and”Abner The Talking Baseball”(These Paramount/Famous”Modern Madcap”movie cartoons would be seen on ABC TV’s”Cartoonies!”With Paul Winchell and his puppets and later on”The New Casper Cartoon Show”during the 1960’s.)

Lawrence auditioned and he was hired to create and perform comedy skits and read viewers mail..inbetween the reruns of  “The Three Stooges” film comedies”. The Eddie Lawrence Show” debuted on WPIX TV Ch.11 in NYC as a weekday evening program starting on Monday September 9, 1963.

Ch.11’s hopes of this series becoming a hit with a mass audience became a disapointment..when they found out that Lawrence’s humor was better suited to teens and adults..his type of comedy simply didn’t appeal to young children.

The station execs tried to change the situation by reassigning Lawrence’s collaborating producer and scriptwriter:Chet Dowling with another comedy craftsman..Lawrence objected to the change and he fought against it.

But..The station execs were adamant and he was forced to take on the new producer and scriptwriter..despite the addition of his new collaborator.

This change did little to make the show more popular with a mass audience.

The show still had a following with teens and adults..but the station execs at Ch.11 were not pleased with the program’s limited appeal.

They continued to take creative control away from Mr.Lawrence, in the late fall of 1963…when he asked station management, if they could allow him to pre-tape his skits..so that he could prepare his new stage musical:”Kelly”?

2 thoughts on “The Eddie Lawrence Show”