So what is your greatest toy from the 70’s, is it the Hot wheels and its track or maybe Magna Doodle, Klackers, Etch-a-sketch or the Chopper bike? Could it be the infamous Space Hopper or Spud Guns. Either way we have put together what we consider the ultimate list of the 10 Greatest Toys From The Seventies

10 Greatest Toys From The Seventies, Mastermind or Stretch Armstrong, what would you say? 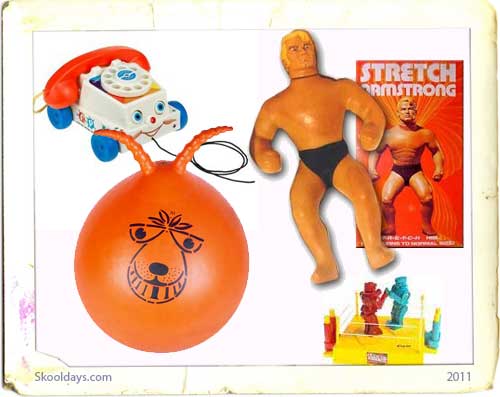 10 Greatest Toys From The Seventies

“We girls can do anything.”
If toys are a gold mine, then for girls, Barbie is the mother lode. The Queen Bee, in other words. The Head Honcha. The Great One. The Almighty Buxom One. Her Highness. Her Majesty. The Chairwoman of the Toy Board. If you played with her, and it’s hard to believe you didn’t, the mere mention of her name probably evokes a clouds-separating, angels-bursting-into-song type of effect.
1.Barbie

Who among us hasn’t held a crayon? Who hasn’t taken an obsessive fancy to one certain color and worn it down to a nub? Who hasn’t reverently opened a new box and filled his lungs with that special paraffin scent (a scent that a Yale University study ranked number eighteen on a list of the twenty most recognizable scents to American adults)? Coloring with crayons is a world that a kid can get lost in for hours. It’s calming, it’s engrossing, and it smells good. May the new shades keep coming, and the may your little brother not step on (or eat) any of your favorites.

In the 1970’s, Ohio Art issued ‘Hot Pink’ and ‘Cool Blue’ frames, and for the toy’s 25th anniversary in 1985, the company offered the Executive Etch-A-Sketch-boasting a snazzy silver frame, a hand-carved signature at the top of the frame and jeweled drawing knobs! It priced in at $3,750 back then, so you better have been ready to devote the rest your days to stylus art. There are even models with color and sound effects, and even the Etch-A-Sketch “action pack,” which included different puzzle and game overlays that could be placed atop the screen. But the best-selling version, and the one indelibly ingrained in our toy culture memories, is the classic red.
3.Etch-A-Sketch

Evel Knievel toys continued to be popular throughout the 1970’s. Although they were discontinued after that time, these toys occupied a special place in the hearts of toy fanatics and continue to be highly sought-after collectibles today. In fact, loose Knievel dolls and accessories can take in as much as $50 on the collector’s markets, and boxed versions can go as high as $100. Several of the classic stunt-toys were also reissued by Playing Mantis Toys in 1998 and found much favor with nostalgic Knievel fans. The continued popularity of these toys shows that Evel Knievel and the toys he inspired are phenomena with true staying power.
4.Evel Knievel

“A new toy every day!”
There are two kinds of gift-wrapped presents you can divine just by holding the box and giving it a good shake: a book, and a box of Legos. Literacy is a wonderful thing, but let’s face it, if you’ve got visions of toys dancing in your head, you’d probably rather hear that glorious Lego rattle. Sure, your mom used to step on them barefoot or vacuum them up because she couldn’t see them hiding in the carpet. And sure, you lost plenty of the small pieces to the cushion cracks of the car’s backseat and the not-often-mowed lawn and the dog’s digestive track. But never mind those perils, because some rides are worth the price of admission.
5.Lego

“Easy to learn. Easy to play. But not so easy to win.”
You have to give Invicta credit. This British plastics company took what was essentially a measuring stick for brainiacs and turned it into one of the most popular games to come out of the 1970’s. Maybe it was that James Bond-esque photo on the cover (aristocratic villain in an executive chair, exotic beauty behind him), but Mastermind always seemed too cool to be just for geniuses.
6.Mastermind 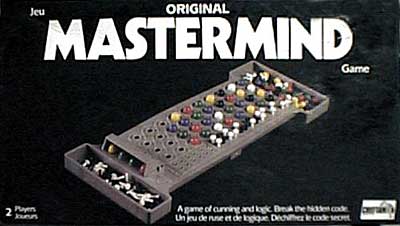 “A game of zany action on a crazy contraption!”
It may be time to revise the old maxim, “Build a better mousetrap and the world will beat a path to your door.” The mousetrap in the board game of the same name may have been the most inefficient, Rube-Goldberg-esque contraption even intended to imprison a rodent. Honestly, were the diving guy and the bathtub really necessary? And yet, as convoluted as this rat-catcher may have been, people have been beating a path to Mouse Trap’s door for over 35 years.
7.Mouse Trap

Basically, Rebound was a miniaturized board-game version of shuffleboard. Just the same, there was a twist to this game of shuffleboard: the board was split down the middle by a wall. The player launched one of four pucks up the right side, carefully angling the shot so it would “rebound” off a pair of angled rubber bands at the top of the board. A proper shot bounced the puck down the other side of the board.
8.Rebound

“S-T-R-E-T-C-H him… He returns to normal size!”
He looked like just another pretty blonde head on a Mr. Universe body. A Ken doll with better pecs and a sporty bathing suit. But Stretch Armstrong was much more than muscles; he was malleable. Bend him, pull him, twist him, tie him in a knot, it didn’t even faze him. He laughed at your puny attempts to harm him (note: toy did not actually laugh). Stretch’s limbs could be pulled to four times their natural span and still manage to squeeze back to normal size, without unsightly stretch marks.
9.Stretch Armstrong

“A Real tough toy for a real tough boy – Tonka!”
Boys love their Tonka Trucks. Love to hold them, love to smash them into other Tonkas, love to take chips out the wall plaster with them, love to personalize them with “vroom vroom” sound effects. Tonkas are an inside and an outside toy—they’re sturdy and virtually unbreakable. There are plenty of moving parts, but not a lot of separable parts, so there’s no need to worry about things getting lost. There might not be a toy that says “boy” more. There are enough models in the product line to make a complete collection seem just barely attainable…instilling the Truck aficionado with a yen for more and more Truck acquisitions (in toy company land, this consumer’s sense of quest means a promotion for everyone in the marketing department).
10.Tonka Trucks

10 toys your parents had