Toys of the 90s
There are many toys of the 90s though a few are more typical than others. We could talk about Digimon virtual pets, Beanie Babies, Micro Machines, Tickle Me Elmo, Monster in My Pocket, Sega Game Gear, Stomp rocket, Tazos, Teenage Mutant Ninja Turtles action figures
or even Water Talkies and Zbots.

1. Furby
Furbies were an electronic robot toy, made by Tiger Electronics. It rose to fame immediately grabbing headlines in 1998 when mothers almost killed each other to get them for their kids. Furby sold 1.8 million units in 1998, and 14 million units in 1999. But it left almost as quickly as it came. 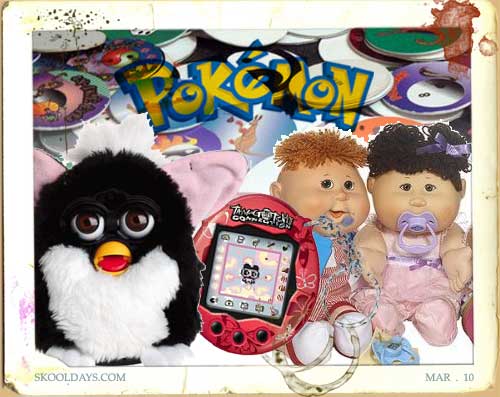 2. Pogs
Who would believe that a piece of cardboard similar to the ones found on the base of a smarty tube or a party popper would prove to be a big toy of the nineties. Pogs was that toy The word “pog” refers to the discs used to play the game. The name originates from POG, a
brand of juice made from passion fruit, orange and guava; the use of the POG bottle caps to play the game pre-dated the game’s commercialization. The game of pogs possibly originated in Hawaii in the 1920s. Pogs returned to popularity when the World POG Federation and the Canada Games Company reintroduced them to the public in the 1990s. The pog fad soared in the 1990s before rapidly fading out.

3. Cabbage Patch Kids
Cabbage Patch Kids are a doll brand created by Debbie Morehead and Xavier Roberts. The original dolls were all cloth and sold at local craft shows, then later at Babyland General Hospital in Cleveland. The doll brand went on to become one of the most popular toy fads of the late eighties and early nineties.

4. Pokémon
Pokémon is a media franchise published and owned by the video game company Nintendo and created by Satoshi Tajiri in 1996. Originally released as a pair of interlinkable Game Boy role-playing video games, Pokémon has since become the second most successful and lucrative video game-based media franchise in the world, behind only Nintendo’s own Mario series.
The Pokémon as a commercial brand is now merchandised into anime, manga, trading cards, toys, books, and other media.

5. Tamagotchi
The Tamagotchi is a handheld digital pet created in 1996 by Aki Maita and sold by Bandai. Over 70 million Tamagotchis have been sold as
of 2008. The Tamagotchi is housed in a small and simple egg-shaped computer. Three buttons (A, B, and C) allow the user to select and perform an activity, including: Feeding the Tamagotchi a piece of food or a snack. Playing games with the Tamagotchi. Cleaning up a Tamagotchi’s waste. Checking its age, discipline, hunger, happiness and other statistics. Connecting with other friends. Marrying other tamagotchis, ah!

Worth a visit : the main site section http://www.skooldays.com/decades/toys_1990s.htm