You are in: Home > Space Dust

Back in the seventies 1975 be be factual, amongst the well known sweets like drumsticks, gobstoppers and rhubarb and custard one pence chews a new amazing sweet or candy was released upon all school kids – Space Dust. This stuff was something quite different as it changed colour while it explodes on your tongue. The explosions sounded a million times louder as they were on your tongue and echoed in your head.

I believe in some parts of the world it was also known as Pop Rocks. 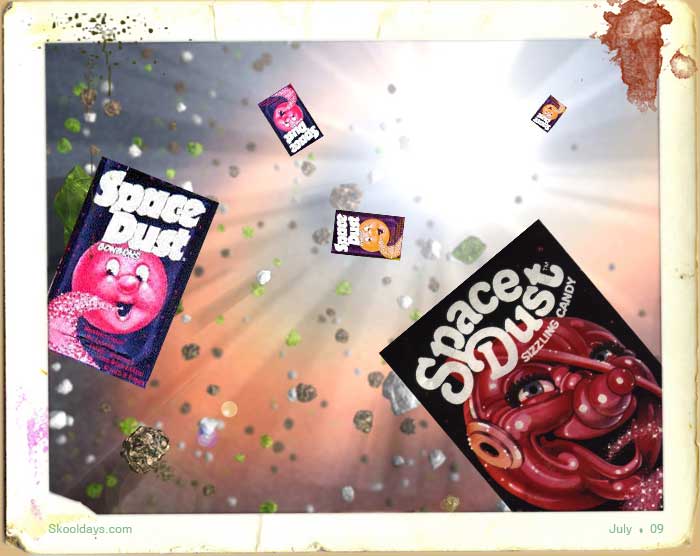 Space Dust differed from Pop Rocks in that the candy was powdery, rather than the large chunks that Pop Rocks had. It gave you more of a nice continuous sizzle like a carbonated drink, rather than the sometimes painful pops of Pop Rocks. They came in Orange Strawberry and Tutti Fruity flavours.

Urban legend claims that Pop Rocks came first, then Space Dust. The Space Dust was actually Pop Rocks dust! It came about because Pop Rocks was made up of large crystals when the product was made. The filings rather than being thrown out was packaged as Space Dust. Space Dust became Cosmic Candy due to the Angel Dust scare.

Some say it was withdrawn as there was concerns over it could cause harm in the stomache especilly if mixxed with fizzy drinks, though no kids in our school ever exploded in such manner.

Did anyone else use Space Dust?