You are in: Home > Space 1999 Eagle Transporter

Who can remember the Space 1999 Eagle Transporter?

So many kids had one and it was great for the initial day you got one but thereafter it just bulked up your toy box, or if you were like me I had large ice cream containers as boxes for my matchbox, hot wheels, corgi and dinky cars. 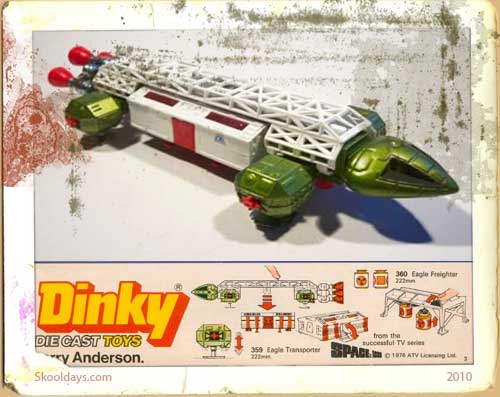 The  Space 1999 Eagle Transporter, was actually based on the star-ship from Gerry Anderson’s cult TV series Space1999 from 1975. The Eagle was a modular utility vehicle that could be used for many different mission operations. The central unit could be removed to fit different units. I remember the transporter had four suspension pads for a soft landing in space, it also had an undercarriage that seemed to get lost very easily. At that point it seemed to have no purpose but to remain forever in my car box chipping away at my newer cars.

Did anyone ever have the Space 1999 transporter and use it for it purpose for longer than the first day?