You are in: Home > Risk Board Game

“Every body want to rule the world”, was a statement and song by Tears for Fears in the eighties. Risk enables your dreams to come true. With up to six players the purpose is to own every country in every continent. 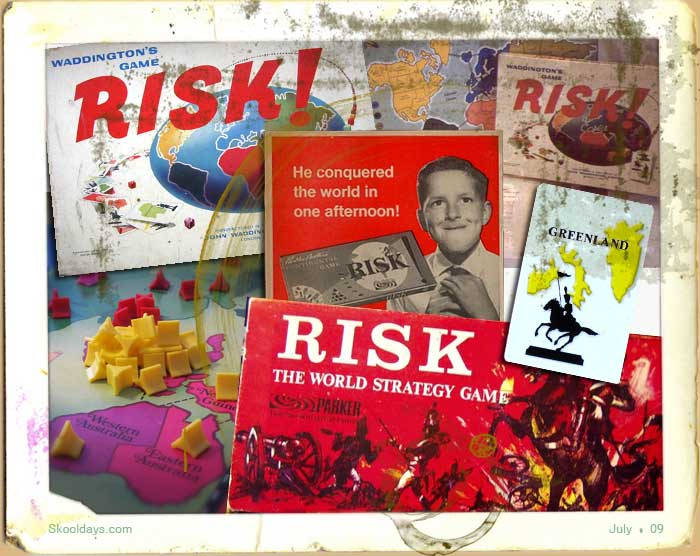 Risk Board Game by Parker

The continents if fully occupied reward you with armies each go, the harder to occupy the greater the reward:

Over the years rules have changed and i would argue not for the better. Some rules asked for you to have a mission for example to annihilate your fellow opponent, or to take over two continents. Though this is a good idea in theory as no one knows your mission and everyone has a different mission at that, these missions are so vastly different in effort that a turn of an easy mission from the start almost gives you the game. At least world domination for each player is equal!

Early sets had round barrels, prisms and subbutteo bases representing armies of one, ten and twenty five respectively. Later sets had hollow cubes and triangles for one and ten armies only. In most cases the six colours were Red, Yellow, Green, Blue, White and dark brown, though black replaced brown in later releases.

Risk is a great game but its downfall is it does rely heavily on luck of dice. A tip to you if you really want to get ahead of your opponent : Always aim for the Americas, they are incredibly rewarding as a complete continent 5 armies for North America and 2 for South America, but also require very little defending, unlike Europe or Asia.

Did anyone else play Risk as a kid or later on in life?

1 thought on “Risk Board Game”