You are in: Home > Laffy Taffy

Laffy Taffy is not a Welsh candy bar, but is a famous song by a band and a nostalgic candy bar in the States. Today we will look at the Laffy Taffy candy bar and not the “Laffy Taffy”  song by Atlanta-based hip-hop group D4L which reached number one on the Billboard Hot 100 in January 2006. 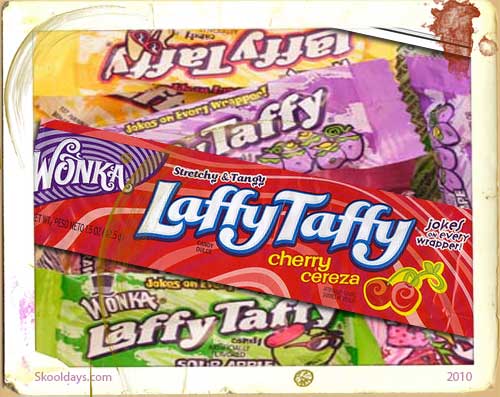 Laffy Taffy is a brand of taffy manufactured by Nestlé and sold under their Willy Wonka Candy Company brand. Laffy Taffy is a brand of candy that is a big favorite with adults wanting to remember their childhood. The type of candy you would by with your pocket money after school.
The Laffy Taffy candy flavors include banana, cherry, fruit punch, grape, sour apple, strawberry, watermelon and wild blue raspberry. Who remembers the jokes? The jokes were so awful that I could not help but wonder just who could write something that horrible.

So do you remember Laffy Taffy jokes or the amazing tastes as a child? Let us know below….