You are in: Home > Soccer Cards

Soccer cards came in all forms over the years but as we are looking and a more nostalgic point of view then I’m afraid we won’t be discussing Pannini stickers and Match Attax today. That’s another days blog.

Today we are talking older Topp’s cards and Football A&BC Gum cards – they were the ones that had a quiz on the back and you had to use a two pence piece to rub the back to get the answer, in effect all the grime and muck on your coin was left behind on the card to reveal the answer! 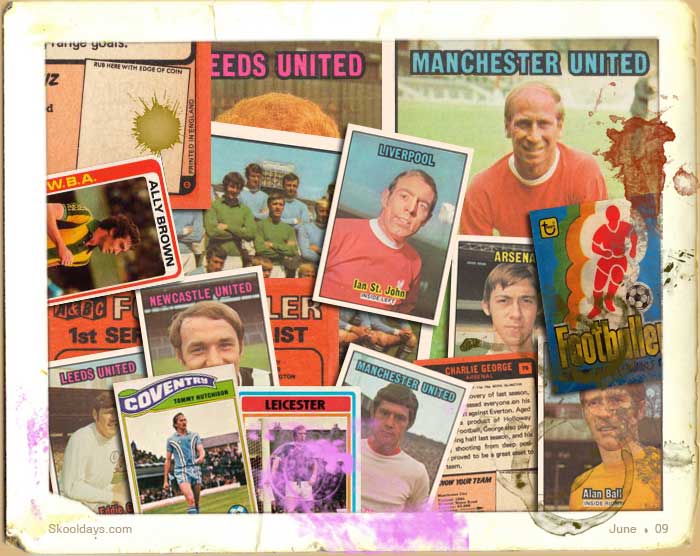 Each card had a number and therefore made it easier to know which ones were missing and the card then had details on the back regarding the player and his playing history etc. They also came with a strip of bubble gum. So most kids in the playground grew major jaw muscles while wheeling and dealing there next transfer swap.
A&BC Chewing Gum was founded around 1948. So how did A and BC become Topps? The Topps Company was founded in the U.S. in 1938, and begun producing Bazooka bubble gum. In 1950 Topps began including cards in with their gum in an attempt to increase sales. In 1952 the then President of Topps came to England and, while there, visited A&BC Chewing Gum. He advised A&BC that they were getting nowhere and advised a tie up with Topps under a license agreement to produce some of their products. At the time A&BC ignored this advice and declined the Topps offer.

A&BC began to expand and after a further visit to America started making Ball Gum for the first ball gum vending machines in the country as well as for their other products. At this stage they were producing about 15 tons of gum each week. The company soon outgrew the premises in Cricklewood and around 1958 moved to larger premises at Colindale in North London.

In 1959, Topps again approached A&BC and this time A&BC were ready to listen. The two companies negotiated a license for A&BC to produce Bazooka Bubble Gum and to reproduce some of Topps’ card gum series, starting with Elvis Presley, Flags , etc. A&BC also agreed to buy some old wrapping machines for the card gum and a new wrapping machine from Forgrove (U.K.) to produce Bazooka, after it had been sent to the States and modified, all very expensive. This then meant that after signing the license agreement, A&BC was committed to paying a percentage of their turnover of all products to Topps, and sticking strictly to the terms of the license agreement.

Over the next 15 years A&BC continued to produce their own series of cards, increasingly focusing on the popular football cards, though they also produced the Topps U.S. series range of cards. Regardless of the source, all A&BC cards were printed in England. A number of A&BC cards are recorded as having the initials ‘TCG’ on the cards, and A&BC on the wrappers. This is understood to indicate where the cards came from Topps but were wrapped into A&BC packets.

One of the advantages in this type of swapping is you really did get to know the players for each club for the year. So as an 8 year old you looked really impressive to all your dads mates when Match of The Day with Jimmy Hill came on and you could name each player quicker than Motty (John Motson). Ah those were the days…

Anyone else collect Football / Cricket / Baseball or other sports equivalents?