1961 was a year that saw congress approve the Peace Corps as a permanent federal agency within the State Department, and Kennedy signed the legislation on September 22. If you were going to school you may well of had a Pets and Pals metal lunchbox with matching steel thermos from King Seeley. Crossing the road became a lot safer once a squirrel named Tufty came a long. Created by the UK National Road Safety Committee to raise children’s awareness of traffic on the roads while adults drove a the popular Hillman Super Minx or the original Daf 750. 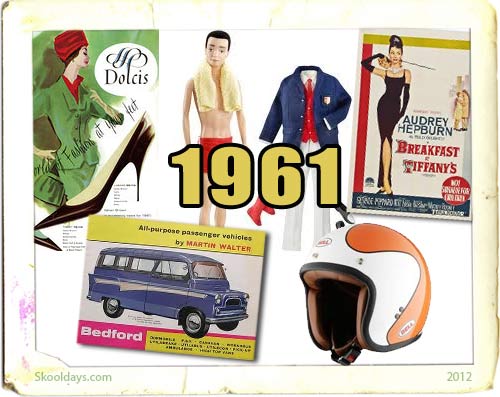 Dr. William Scholl an orthopedic specialist created a wooden clog in 1961 which we today know as Dr. Scholl’s Exercise Sandals. For the ladies 1961 Dolcis High Shoe was coming into the high street window as the must have shoe.

This was the year The Hollies started up.

The Yo-Yo becomes the newest craze and is the largest selling toy. The Wham-O Company introduced Slip ‘N Slide, while other kids were playing Mr. Machine learning tool. With a few twists of the key on his back, Mr. Machine took off, his clear body letting kids watch his insides churning. Gears spun around, arms and legs swung, his mouth opened and closed, and a bell on his belly rung. Another popular toy in 1961 was the Fisher Price Vintage Chatter Telephone. Of course this is become popular again since being relabeled as the Toy Story Phone

The original The Parent Trap was released in this year as well as Babes in Toyland and Breakfasts At Tiffany’s. Your TV schedules included On Your Mark in ths year as well as The Avengers and The Dick Tracy Show. Another TV classic show you may remember was Voyage to the Bottom of the Sea. It was a science fiction film produced and directed by Irwin Allen, released in 1961 by 20th Century Fox. Lets not forget how cool Steve McQueen was back in this year.

At this time the Berlin Wall was built to separate East from West. while the Soviets launch the first man into space. Coca Cola introduces Sprite to complete against 7-Up.  Another race is under way.

Prime Time in the 50s