You are in: Home > Tri-Tactics Board Game

Tri-Tactics was a popular board game in the seventies by H.P. Gibson

It seems all the kids in the School Cadets had a set of Tri-Tactics. I’m not sure if these sets were released with all Cadette memberships but clearly it was a big game in there world. surprisingly one rainy day when football was off during the lunch time, i was introduced to Tri-Tactics and it proved to be a great game. 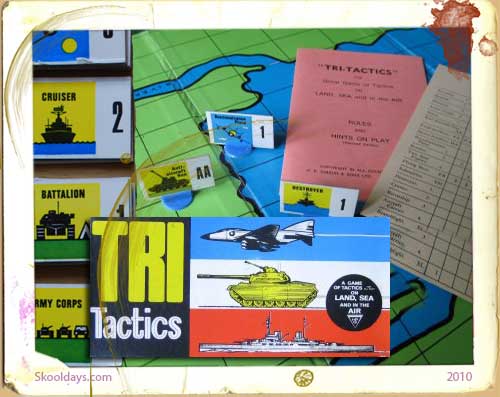 In many ways it reminded me of Stratego and Tank Command, the only difference was the budget and commercialism of Tri-Tactics compared to the two games mentioned.

It really was a superb game as Tri-Tactics felt it was played from the roots of all war gamers. The game had the tag line “A Game of Tactics on Land Sea and Air”. Actually Tri-Tactics was a based on a combination of some other popular games such as Dover Patrol and Aviation.The popular war-themed strategy board games released by H.P.Gibson & Sons in the 1930’s grew in popularity. In time H.P.Gibson developed in 1935 Tri-Tactics where all aspects of those games worked in the use of land, sea and air units.

Tri-Tactics will know doubt have many fans that have there own strategy as being the best way to play. I must admit its been many years since I last played this game. I have little memory of the strategy i used back then accept the similar strategy i currently use in chess, – “get the upper hand from the start and then solidify”.

2 thoughts on “Tri-Tactics Board Game”