You are in: Home > Risk board game

Risk has proven to be one of the most lasting board games ever. It is simple enough for all the family to learn but as the title entails requires a certain amount of risk to win.

A complete set of Risk contains:
A Risk Game Board map of the world, 5 Dice,a deck of 56 Risk cards and 6 Sets of Armies in different colours. 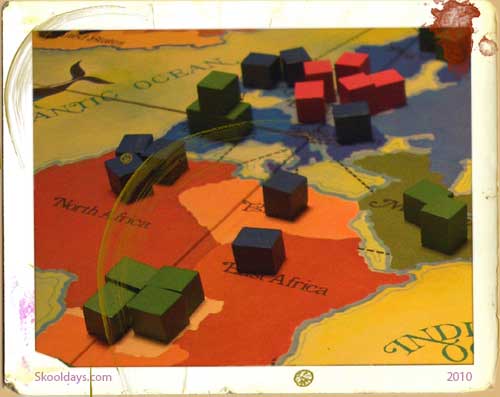 Risk is a strategic board game, produced by Parker Brothers and was invented by Albert Lamorisse in 1957, as The Conquest of the World.

The board game Risk is a turn-based game for two to six players. The standard version is played on a board depicting a political map of the Earth, divided into forty-two territories, which are grouped into six continents.

Players attempt to capture territories from other players by rolling higher die numbers. The game is won when one player has managed to occupy every territory on the board.

Each continent has a bonus set of armies if occupied a full round. The challenge is to keep it occupied.
Asia is the largest and hardest to occupy with 7 bonus armies received for your efforts. Then North America is worth 5, Europe also 5, then Africa 3, Australia 2 and South America 2 armies.

Ive played the Risk board game for decades and still find it one of the most enjoyable games to play with friends and family.

4 thoughts on “Risk board game”