You are in: Home > Monopoly here and now

Monopoly Here and Now was released in 2006.

After years of several versions of Monopoly, the here or now version took the world by storm. The Here and Now edition of Monopoly features top landmarks across the US. The properties were decided by votes over the Internet in the spring of 2006.
As a site looking at nostalgia on Skooldays its sad in many ways to see changes in such lovable board games like monopoly, but in some ways its justified. 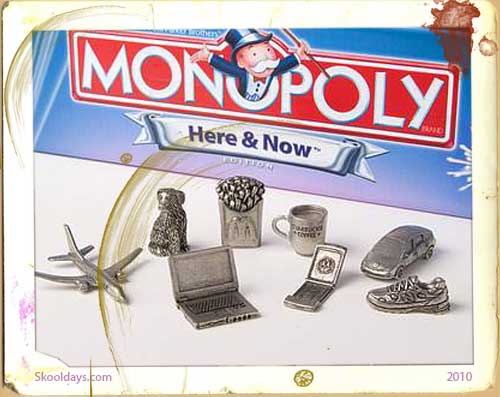 The history of Monopoly can be traced back to 1903, when a Quaker woman named Elizabeth Magie Phillips created a game through which she hoped to be able to explain the single tax theory of Henry George. Her game, The Landlord’s Game, was commercially published in 1924.
In 1935 Parker Brothers bought the rights from Darrow and started manufacturing a slightly updated version. In the same year Waddingtons bought the UK rights to the game and made a version based on the streets of London.
In 1941 the British Secret Service had John Waddington Ltd., the licensed manufacturer of the game outside the U.S and the game grew in popularity.
On the 2006 Monopoly here and now edition, changes include money thats more up to date with real financial markets along with realistic Chance and Community Chest cards.
Other changes include the houses and hotels are blue and silver. The board also has colour changes.
By 2008, Hasbro released Monopoly Here and Now: The World Edition. This world edition features top locations of the world. The locations were decided by votes over the Internet.
Monopoly still proves to be one of the greatest board games ever.