You are in: Home > Business Game

Waddington’s produced so many great games and every so often one stood out. Business Game certainly stands out for all the wrong reasons. Similar in some ways to Game of the Nations, it just lacks the lustre to get new players involved.

Business Game is a re-packaged edition of an old classic board game called Mine a Million for 2 to 6 players. The game didn’t change, it was just a marketing change to try and re-popularise a game they thought had some yardage. 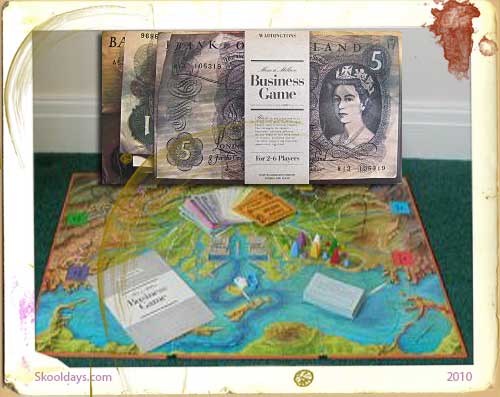 The aim is to make a Million dollars from mining. Players own tin mines and must try to maximise production, transport the ore to the docks and either sell it or ship it on by sea to ports where it can be sold for Dollars. In theory it sounded a good game but it lacked any excitement as often a player would get bored before you were half way through. Unless all the players were really into puffing cigars and boasting about shooting JR, then you probably found it the same. The Business game was a good game but very specialised.