You are in: Home > Classic arcade games

Classic arcade games are still a very big attraction 30 plus years on.

So what are our Top 12 classic arcade games ever!
This wasnt easy but in some ways we beleive the depending on how influential they were in the 5 to 10 year arcade window would provide us with the basis to judge.

1980 was the year where not only did it have some awesome releases of real classics arcade games, but the home computer market kicked off with emulations of dots and blips as Pacman or Space invaders in everyone home. 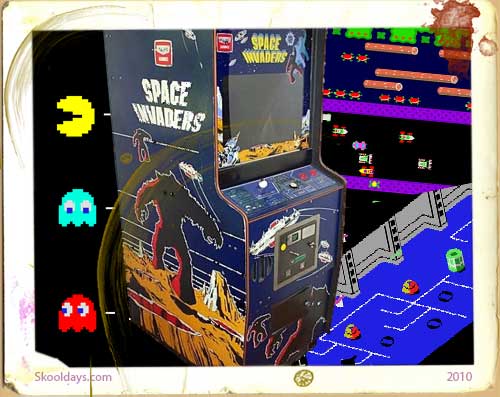 So here we are in order of release

A Classic arcade games machine found in nearly every fish and chip shop on the high street. Space Invaders was one of the hottest fads on the globe, helping propel the video arcade into a multi-billion dollar industry.

Asteroids was a classic game with later levels bringing the visitation of unfriendly UFO’s, which fired blindly as they made their way across the screen. If you were lucky, they’d take out a few asteroids for you, but you were better off trying to blast the UFO itself, earning some hefty bonus points.

Galaxian’s was a real classic move up from space invaders. Though its innovation wasn’t exactly earth-shattering, it was more than enough to set the game apart from the pack of clones. The aliens still lined up in orderly rows, but they broke ranks to swoop down and attack your fighter, often led by a commanding flagship.

As Arcade games go Defender still has a great game play. A groundbreaking achievement in video game history, the cosmic hit Defender was all the more remarkable in light of its surprising history. Before Defender, neither game designer Eugene Jarvis nor pinball giant Williams Electronics had ever produced a video game.

One of the first arcade games to use a Trak-Ball controller and three buttons. Missile Command required you to man a strategic defense arsenal of missile interceptors. As enemy warheads streaked down from the sky, you fired off rockets to meet them in midair, protecting the six cities at the bottom of the screen. If a nuke made it past your defenses, a city went up in a horrible blast.

Its claimed that Pac-Man was the most successful arcade game in history, but more than that, the little yellow orb with the enormous mouth became the official image of the entire video game industry. Space Invaders made video games into family entertainment, but Pac-Man gave them personality.

In the Early 80s this arcade classic was n’t aware of the stars it was about to make – even a movie would come from this legend of a game. Back in his Donkey Kong days, Mario wasn’t actually the Mario we’ve come to know and love. At the time, the character was simply known as “Jumpman” (the “Mario” name came out in later promotional materials), and he never even came anywhere near a leaky pipe or an angry Koopa Troopa.

Frogger was a simple arcade game with a lot of fan base. Frogger started your daredevil amphibian at the bottom of the screen, separated from his five lily pad homes by a busy street and a cluttered river. Using the joystick to hop up, down, left and right, you guided your frog pal up and around the speeding vehicles to the relative safety of a dirt median.

Zaxxon felt special because it was the first 3 dimensional arcade play. An altimeter at the side of the screen showed your current height, a necessary tool for soaring over brick walls and slipping through deadly “laser barriers”. Your mission was simply all-out destruction, blasting away at every gun turret, missile, radar tower, fighter and fuel tank in sight. Your own fuel was limited, but refills were available with every enemy fuel cylinder hit.

Mind blowing arcade action. Dragon’s Lair wasn’t as fully interactive as its video game contemporaries. The game was made possible through the use of Laserdisc technology, whereby Bluth and company were able to animate several scenarios for each scene, essentially making a full-motion.

Spy Hunter was a classic driving and shooting game. Spy Hunter allowed you to live out a dangerous, Bond-esque mission over land and sea.

As our heroic paperboy rode down the street on his finely-tuned bike, he passed the houses of newspaper subscribers and non-subscribers alike. If he wanted to keep his job, he made sure to toss papers safely onto the doormats or into the mailboxes of subscribers, but everything and everyone else was fair game.