You are in: Home > Warlock of Firetop Mountain

Published by Puffin in 1982
Try and imagine life without computer adventure games or interactive movies and you’ll understand why Warlock of Firetop Mountain by Steve Jackson and Ian Livingstone became a massive seller in 1982 though it started conception back in 1980. 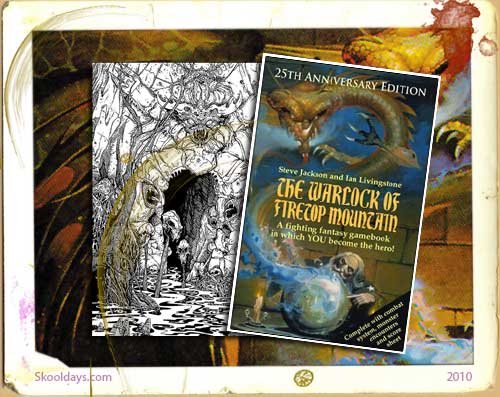 For the first time a book became interactive. You were the main character, and you chose the outcome your own destiny.
This single-player roleplaying gamebook, must of been heavily influenced by role playing games such as Dungeons and Dragons as it had many similarities. With the aid of just dice, a pencil and some pages that a pencil could never write on properly, you too could dodge Orcs, Dragons and The Maze Of Zagor in the hope of discovering the Wizard and his multi-lock secured treasure chest.
Other Fighting Fantasy books soon followed including The Forest of Doom and Citadel of Chaos. Today it seems slightly insignifcant and i notice that there are shelves of these types of books for teenagers today. But being the first of its kind, it still has a lot of special fond memories for many school children

1 thought on “Warlock of Firetop Mountain”