You are in: Home > Tank Battle

In 1976 Tank Battle was the latest release from MB Games.

My cousins had this game and it kept us busy for a long time in that hot school summer holiday of 76.

Looking back it was a conversion of other 2 player games such as the awesome game of Stratego or Tri-tactics. The game only has 6 tanks on each side though so it is somewhat of a quicker game

Tank Battle had a few additions to the above games in the fact it had the additional battle-ships-style plotting grid to represent mines. The result was a very playable game that worked well. Flags are used on some tanks to indicate they have greater movement. 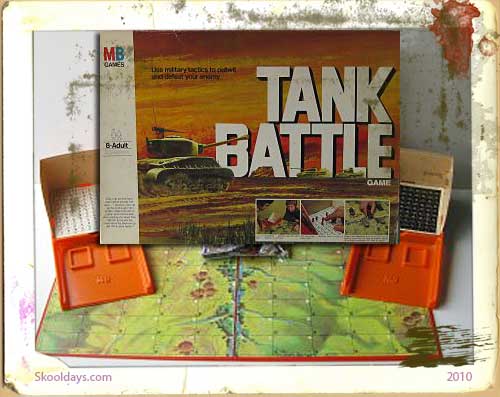 The tag line was “Tank Battle is a game of military tactics. Can you outwit your opponent? – Two rival armies face each other across the river. Defences are in position. Mines are laid. Tension mounts…and the tanks go into action!”

I’ve not played the Tank Battle game for many years now and i imagine it went out of production quite a few years ago. Some of sold on eBay for up to £30 recently.

The Battle of Little Big Horn