You are in: Home > London Cabbie Board Game

Here is a great game to remember from Intellect Games, London Cabbie
This taxi driving game is a lovely little game that our UK visitors may remember.

This game for 2 to 6 players is now very hard to find in complete and good condition as it was only in production for a few years in the early seventies. 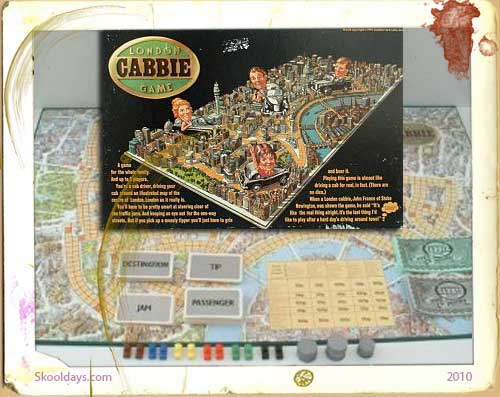 The artwork on the box made this a really attractive game with massive heads poking out of each cab and a colourful map of London. The game play was fun. Running a couple of taxis around a map of London you soon get into the idea of planning very efficient trips. With traffic jams inevitable and tips varying from a penny to a pound, the game is all about beating other cabbies at there own game.

If ever they were to update this game, they would have a great addition to a section of the board, the congestion charged area, the low emission zone and bus lanes, I’m glad i never became a London cabbie driver now!

1 thought on “London Cabbie Board Game”