You are in: Home > Escape from Colditz

Escape from Colditz for the Amiga by Digital Magic Software Ltd. It is a fantastic adventure game that will keep you gripped for years and is available on several emulators.
Released in 1991 the Amiga games is based on the Gibson Games board-game. You are in control of a team of 4 prisoners of war (POWs) – a British POW, a Frenchman, an American and a Polish POW) The aim of the game is to attempt an escape from the Colditz Castle. You control each of the 4 men separately, each of them starting within their own quarters on different floors of the camp, and can always switch between them.

You must avoid entering forbidden areas – do this and you will be placed in solitary confinement and have your equipment confiscated – if you attempt to run from the guards in such areas they will shoot at you.

You discover the grounds by collecting keys and useful escape items and mapping out the areas (some restricted) you will need to collect: 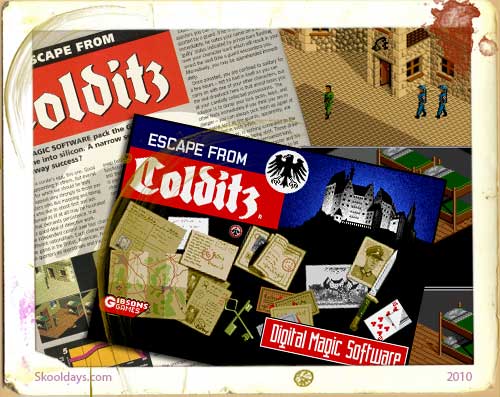 AIM
Your four characters have been imprisoned in Colditz castle and its up to you
to guide them to freedom. Each character is allowed to move freely within his
own quaters, and at certain times in the inner courtyard. You will need to
explore deep into the German quaters in order to collect the equiptment you
need to escape.

Pressing fire uses your currnetly selected object. Some objects can only be used in specific locations.

To open and close doors, select the correct key, press fire and walk into the doorway. You can only use each key or lockpick once.

The Pick-axe, shovel and saw open up dis-used tunnels. Select the correct tool, stand over a weak spot on the floor and press fire.

A stone can be thrown to distract a nearby guard. Select the stone in your inventory window and press fire. the lonhger you hold fire, the further you will throw the stone.

To use a disguise select the german uniform and press fire.

You will come across other objects in your search, all of which are used in the same way.

YOUR MEN
You can set up one or more of your men as ‘stooges’ or lookouts, by pressing F10. When a German comes near to him, control will automatically switch to him and thereby give you a warning of approaching guards. To come out of ‘stooge’ mode reselect him by pressing keys F1 to F4.

KEYS
Space – Toggles Walk/Run.
LEFT and Right Arrow – Cycles through your inventory.
UP arrow – Pick up
Down arrow – Put down.

Well known cheats include
During play type: “Keymaster” and you receive all the keys
type: “die die die” and all the guards die
type: “i want everything” and you gain the whole inventory

Strategy
Never carry too much equipment at once because if you’re caught, every item will be confiscated and lost. Stash equipment in “Safe” areas (e.g. the Chapel) as these places are never searched by the Germans. Although several trips may be required and this can be time consuming, you run no risk of having valuable equipment confiscated.

If you haven’t come across Escape from Colditz for the Amiga then I suggest you track it down- its a great little game that needs a loving updated version.

1 thought on “Escape from Colditz”