Whether a ZX Spectrum 16K or 48k it was cutting edge technology once upon a time. I remember reading a readers digest once in 1982 where it said they would give £100 to the best story. I so wanted a ZX Spectrum and guess what, they were priced at £99 at the time. I so desperately tried to think of a story to write, come to think of it, this would of made a good story in itself.

The first game i ever saw on the colour ZX Spectrum (we all expected it to be called the ZX82 as it followed the ZX81 and the Z80) yes colour 8 of them if you include black was a game called “escape”. It was a maze game full of animals and 3D and colour, and rubbish gameplay.

In the days before a mouse or joystick life was all about rubber keys, and the z & x buttons for left and right. Q and A keys were for up and down and space for jump or fire. Rubber keys ruled, as we had the space age touch sensitive keys of the ZX81 the previous year and before long we were having to use a hammer and chissel on the letter “e” key.

The loading of ZX Spectrum 16K or 48k games was a real joy when you had to put up with a screaching tape deck for hours until the computer claimed it hadn’t loaded, so a rewind and start again process would take place for the evening. When it didnt load you would claim it was too close to the Televisions magnetic field, or i need to adjust the heads on the tape deck, or it was cause my little sister sat on the sofa.

Cleaning the heads on the tape recorder with cotton wool buds and my junior aftershave (because it was alchol based) was another option if things got really dire. 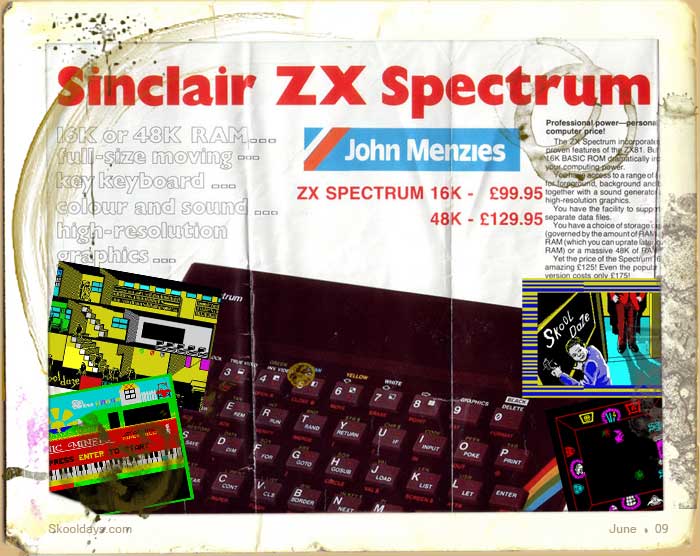 Who remembers spending a night and a day punching in each line number and code from a computer magazine and finding it didnt work. So then you go through every line in the code again and it still didn’t work and it took hours to do. Then next week the magazine appologising that the code never worked in the first place! i hated those times and yet there is some nostalgic value to treasure.

Decent games soon followed including Manic Miner and Jet Set Willy, Attic Attack and Chuckie Egg to name a few. With additional memory upgrades and eventually being bought out by Amstrad, the Spectrum lasted a fair few years. Eventually it was superseded in popularity by the Atari and Amiga, but thats another story to blog.