You are in: Home > The Magic Clown

“The Magic Clown” debuted on NBC TV as a Sunday afternoon series on September 11, 1949. Set against the backdrop of a traveling circus, illusionist, Zovella played the title role.

As he engaged his viewers and studio audiences in magic tricks, games for prizes,introduced guest performers and promoted”Bonamo
Turkish Taffy”. 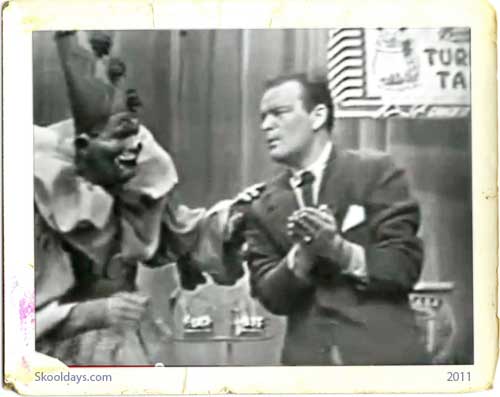 The series had a modest success on NBC TV..Zovella would play “The Magic Clown”, until he left the show in 1952.

He was replaced by Richard Dubois..who played the character from 1952, until he left the show in 1954.

NBC TV dropped the show..but the character would return to The NYC Airways in 1958 on WABD TV Ch.5.

Aided by his wife Gayle, the pair would entertain and inform their viewers and studio audience on sunday mornings for most of the 1958 tv season.

The series was dropped by WABD TV Ch.5 in NYC, it would later move to WNTA TV Ch.13 in The Newark N.J./NYC viewing area a year later.

The Anderson version of “The Magic Clown”was a hit and the show became an even bigger succcess than the two previous formats.

Sadly, the show left the Newark,N.J./NYC airways following the 1959 season.

“The Magic Clown” made his last tv appearance in a limited syndicated format produced in Canada in 1970.

Magician and escape artist: “The Amazing Randi” would played the clown from 1970 to 1971.

7 thoughts on “The Magic Clown”