1964 was a leap year that saw Martin Luther King, Jr receives the Nobel Peace Prize, James Bond released his third outing with Goldfinger along with all the merchandise and comedian Harry Hill was born in 1964.

The Summer Olympics were held in Tokyo, Japan. Meanwhile Roald Dahl was busy writing Charlie and the Chocolate Factory in 1964

If you were learning to read at school you may remember the Peter and Jane Books. They became known as a series in the Key Word Readers set and helped many youngsters get to grips with words such as Ball, Dog and Cat 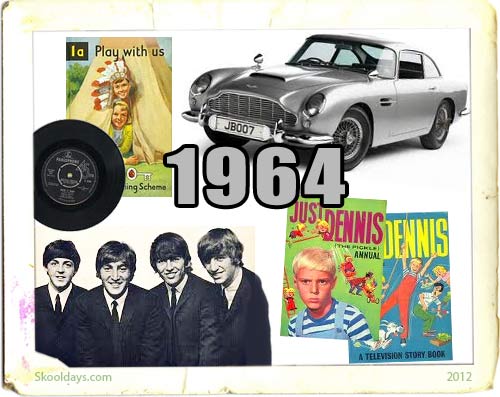 This was the year of where the president signed the Civil Rights act of 1964. In the UK the death sentence was abolished. Meanwhile Nelson Mandela is sentenced to life in prison.

With Goldfinger movie this year came the merchandise and gadgets for every toy box, The popular choice was the Corgi 261. It was the James Bond Aston Martin DB5. If you try and find one today then look to pay around £60 that’s about $100. The Gold ones go for more than the silver version.

Dennis the Menace or actually Dennis the Pickle started off as a daily syndicated newspaper comic strip originally created, written and illustrated by Hank Ketcham. This comic strip made it onto kids bookshelfs with TV annuals for the next few years.

It was also the year when you learnt how many things in the home were metal. Let me explain by saying it was the year Wham-O’s 1964 monster piece was released. Known as the Monster Magnet, which fused the power of the monster with the power of magnetic energy.

This was the year Nicolas Cage and Bridget Fonda were born. If you went to the flicks in this leap year you would of been getting your pop corn before seeing Mary Poppins,  or Clint Eastwood in A Fistful of Dollars.

Dr. Strangelove or: How I Learned to Stop Worrying and Love the Bomb was another big movie starring Peter Sellers. This Comedy was about an insane general, who starts a process to nuclear holocaust that a war room of politicians and generals frantically try to stop.

The Beatles took the world and America by storm and Beatlemania went into overdrive as they released a series of number one hits including “I want to hold your hand” , “All my Loving” .