So what do you remember in 1962? The year Marilyn Monroe was found dead. You probably had better site than the ever popular Mr Magoo, while The Flintstones and Dino lunch box was in charge of your school lunch

Many children were also engrossed in reading about the adventures of the Famous Five. As Enid Blyton led them on their journeys which were in effect based in Dorset, Five Have a Mystery to Solve and Five Are Together Again were published. 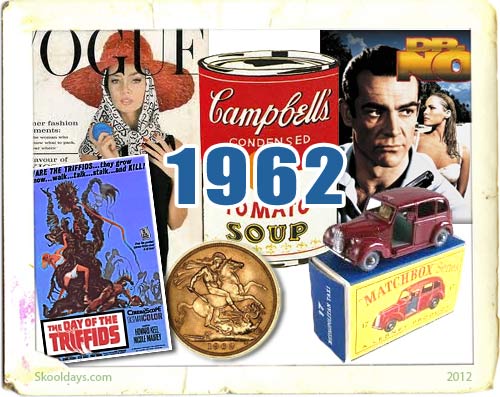 With the Space Age well and truly on track, you may remember the Paper dresses. They were based on what NASA had created, paper clothing for its astronauts: the disposable duds made sense miles up in the atmosphere.

Girls may remember the Tammy. The plastic Tammy swept onto the doll scene in 1962, she was twelve inches tall, fully jointed, the proud owner of slightly side-glancing eyes. A competition for the ever popular Barbie.

For the boys they could start there very own Grand Prix. Waddingtons Formula 1 Board Game was released this year and it must be said had a very realistic game play

Andy Warhol Exhibits His Campbell’s Soup Can, in the same year a death occurred while someone tried crossing the Berlin Wall. 1962 was also known for the Cuban Missile Crisis.

Mellow music from Pat Boone amy of been on the radio this year but Frank Sinatra was still churning out 5 or 6 singles a year. Hear were the top songs on 62

It was also the year The Andy Williams Show had a family perform each week. Only a few years later would they reach huge popularity. In 1962 you would of known them as a  singing barbershop-quartet family with gospel tunes , today we know them as The Osmonds

How can we forget that 1962 was the start of an amazing 007 francise. The Ian Flemmings James Bond was on the silver screen with Sean Connery. He  firmly established himself as the one true Bond with Dr. No this year.