You are in: Home > Just Dennis the Mennace

Just Dennis? Well It seems that Dennis is the name to have in the 60’s or 70’s especially if you were the type who caused trouble and mischief.

Yes while kids in the UK enjoy “Dennis the Menace” as a curly black haired menace causing havoc with police in the UK neighbourhood along with his dog Gnasher, the USA “Dennis the Menace” was younger, slightly more innocent and caused great upset to his neighbour Mr Wilson, oh yes he had blonde hair too. For UK readers not to miss out and so as to avoid confusion with Beano Comics Dennis, “Dennis the Pickle” or “Just Dennis” became the marketed name of the Dennis Mitchell. This USA comic strip was drawn by Hank Ketcham. His Dennis was always playing havoc in the Kansas area of Wichita. 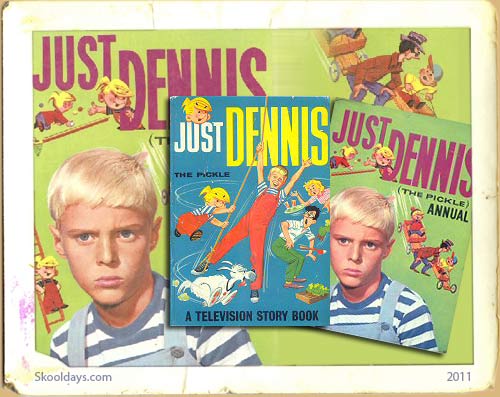 Dennis the Menace started off as a daily syndicated newspaper comic strip originally created, written and illustrated by Hank Ketcham, but has since then has become a movie, book and cartoon feature. It seemed to change names when converting media to the Television. The television version screened in the UK simply as Dennis.

I loved the Dennis the Menace annuals though being a UK resident, always knew them as Just Dennis (the pickle) from the great Hank Ketchum TV series and Comic Strip.

At the moment I’m trying to track down the Just Dennis Television Story Book of 1964. So if you know of it’s whereabouts, please let me know. In the mid sixties around 10 annuals were released under the Just Dennis title (according to Tony’s excellent annual trading site)

Another favorite was the other 1964 Dennis TV annual. It seems that more than one annual was released during the year of 1964.