You are in: Home > Masquerade Party

This tv game show had a panel of famous performers and personalities trying to guess the true identities of the persons..who were hidden under make ups and costumes.

The hosts of the series varied from the different versions that aired on the three networks during the 1950’s. Bert Parks, Eddie Bracken, Robert Q.Lewis, Douglas Edwards and Bud Collyer mc’d the proceedings. But? The one mc that maintained the program during it’s run was former radio comic / character actor, dialectician and wit: Peter Donald. Peter Donald was best remembered for playing soused resident “Ajax Cassidy” of “The Allen’s Alley” segment of “The Fred Allen Radio Shows”. 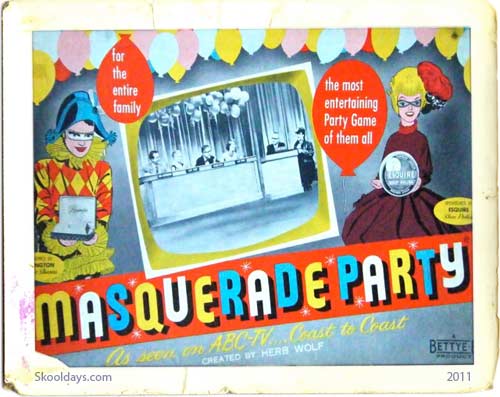 Mr.Donald kept the pace going and the atmosphere of the show fun and light.

Among the famous persons..who were willing to undergo the difficult ordeal of putting on the disguisess were:Bandleader Fred Waring (Who was decked out as a penquin),”The  Three Stooges” (dressed as The Three Gabor Sisters) and George Reeves (TV’s “Superman”) Ironically he was dressed as a box of the show’s sponsor : Kent Cigarettes.

There was also an additonal segment..where a viewer at home would try to reveal the guest masquerader by sending their guess via the mail and their guess would be mentioned on that program..if the home viewer’s guess of the disguised person(s)was correct? The home viewer would win a prize.

Masquerade Party revived in the 1970s

The show was revived again in the early 1970’s for national syndication by vetrain tv game show producers:Stefan Hatos And Monty Hall (The producers and creators of”Let’s Make A Deal!”).

Instead of having a rotating series of guest panelists appearing on every other show..This version of the program had a regular group of famous persons trying to “Unmask the masqueraders”..actress Lee Meriweather,comic/character actor and song and dance man:Nipsey Russell and Bill Bixby would try to find out the true identities of the guest masqueraders..Jackie Cooper, Bill Macy,Cathy Rigby,Dr.Joyce Brothers,Bob  Barker, Ronny Cox, Bob Crane, Robert Clary, Will Geer, Gary Burghoff, Andy Devine, Ray Walston, Pat O’Brien and many other famous persons tried to fool the panel.

There was also a segment.,.where two members of the studio audience would try to ferret out the true idenity of the disguised person.

(Mr.Bergen had also appeared on the 1950’s version of  Masquerade Party  with tv’s top ventriloquist of the time Paul Winchell..where both men were playing “Dr.Henry Jekyll & Mr.Edward Hyde”)

Unfortuneately..the 1970’s syndicated version of the show was not as successfull as the 1950’s network edition and it was cancelled after one season.

Masquerade Party in the 1980s

The concept of  Masquerade Party  was revived one last time in the 1980’s as a segment on Dick Clark’s ” TV Bloopers & Practical Jokes TV Series” under the revamped title of “The Surprise Disguise”..Don Adams,Mr.T, Pat Morita and Adam West & Burt Ward were the famous persons willing to put on costumes and make ups for this segment.

Does anyone else remember Masquerade Party Tv Game Show from the 1950s?