You are in: Home > Zippy the Monkey

Zippy the Monkey or Chimp was so weird. I never had one but all my mates did and i have to say they gave me the creeps! I guess it was due to the fact they were so life like and about the same size as the average toddler. They had a red & white hat. Shirt with the name “ZIP” printed on front. Red Corduroy pants with suspenders. Black plush body with rubber face, hands and shoes. “Rushton Co” printed on bottom of shoe. No Banana. I seem to remember his arm squeeked too. Zippy was re-introduced to the market in the 1960s & 70s again, by the Rushton Co. He looks the same as the original 1950s version – except the 50s Zippy had Howdy Doody on his hat. 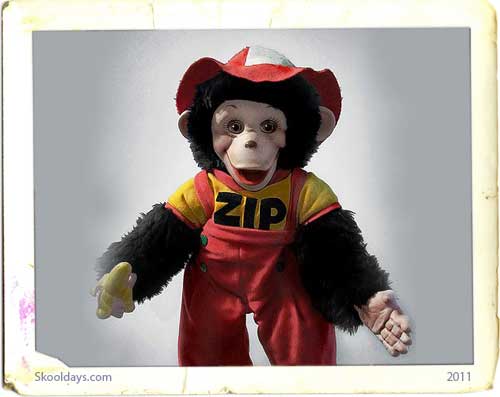 Zip the Monkey stuffed animal was derived from the famous real tv chimp of the 1950s. He made many appearances including the Howdy Doody Show.

Zippy’s girlfriend was Tippy – she looks just like him except her fur is white and she wore a dress.

Ebay is full of imitation zippy’s for a small price but the originals are now fetching anything from £100 up!

6 thoughts on “Zippy the Monkey”