You are in: Home > The Peter and Jane Books

The Ice-Cream man is always a main part of a child’s summer holiday memories. This is a vintage Ladybird Book illustration from ‘Happy Holiday’ is from the Peter and Jane series.

This is an illustration from book 7a – Happy Holiday – The Ladybird Key Words Reading Scheme (The Peter and Jane Books). By William Murray; illustrated by J H Wingfield. Published in 1964. 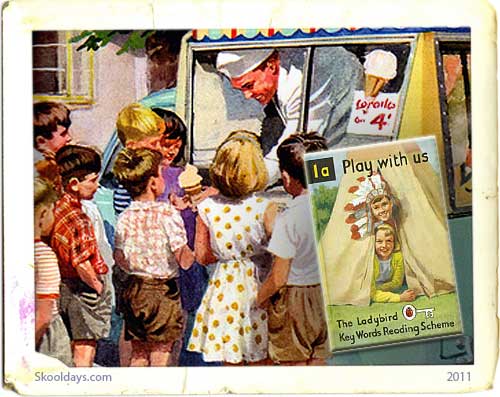 They became known as a series in the Key Word Readers set. In the 1960s Peter and Jane seem to where the same clothes most days. Jane is usually in a white dress with a red ribbon in here hair. Later Peter and Jane are now 1970s children – Jane is most often in jeans; Peter plays around with a football rather than a cricket ball and they generally look scruffier. The whole series was published with laminated boards for teaching in schools from 1983.

The books took them all over the country on innocent adventures and were always so beautifully illustrated for children to get lost in. Today it’s sheer nostalgia for us oldies.

Here is a list of the sets to collect in order of release dates:

1 thought on “The Peter and Jane Books”