You are in: Home > Janet and John or Alice and Gerry?

Many kids were brought up on Janet and John
You could say the old-fashioned way, but was it the best way
Innocence really did exist in these days. 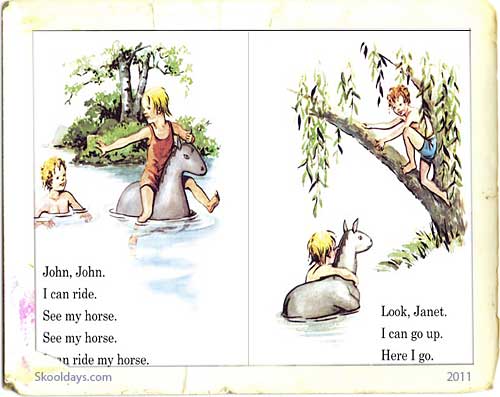 Mabel O’Donnell and Rona Munro from New Zealand, and published by Row Peterson. Originally there wer known as Alice for Janet and Gerry for John.

Then James Nisbet bought the rights to them and republished the stories as Janet and John in the UK. Janet and John were portrayed as average English children, living a typical middle-class life, and the books consisted of stories that progressively incorporated key words needed in the development of reading skills.

These books were fully adopted by schools and became a major source for reading in the 1960’s for school children.

In the early seventies, Janet and John’s straightforward and simple world was seen as being outdated and the books fell out of favour and were soon surpassed by the ladybird books of Peter and Jane.

1 thought on “Janet and John or Alice and Gerry?”