You are in: Home > Houseparty

Houseparty from Southern Television was the Loose women of the 1970’s. The Houseparty door would go and ladies would pile into the coffee morning meet up with either a new crochet pattern or news on Albert’s hernia or Aunt Phylis and her Artheritis.

It must of got viewers as it ran for well over a decade. I don’t think men were allowed on the show, it was just ladies and there crafts from my memory. Of course unless you were sick from school you never saw it.

Other episodes of Houseparty included making cucumber sandwiches or a chilli in a big slow cooker. The women all seemed to know each other from various backgrounds. Vera got a new hoover and demonstrated that for the ladies, while Joyce and Betty told them about the new book they had borrowed from the local library. 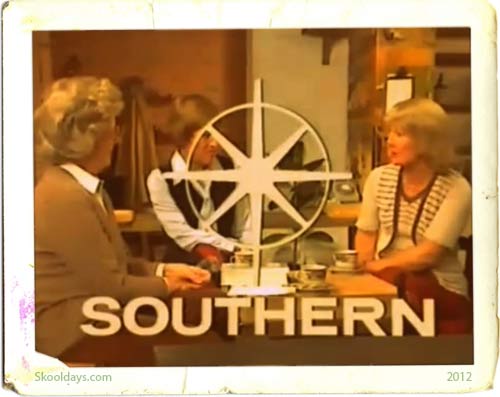 Houseparty featured the sort of items expected to be found within the covers of a “magazine for women”, such as cooking, knitting, crafts, and general gossip. The studio was arranged so as to resemble a living room and the regular ‘guests’ rang a ‘doorbell’ when they arrived after the programme had started, often bringing items of interest with them. It may have been a rather ‘phoney’ idea but the show was popular; it only ended when Southern stopped broadcasting, though Meridian revived the show for a brief time with the daughters of some of the original cast, in 1993.

The more you think about Houseparty, the more you realise it was actually quite awful, but at the time it was enchanting to see a show presented by women for women. A wide range of topics were discussed and various housekeeping items were demonstrated.

So what happened to the ladies on Houseparty? Cherry Marshall died a few years ago, following long retirement in Frinton On Sea. Lucy Morgan died of breast cancer. Daphne Lee died in France where she had retired. Anne Ladbury occasionally appears on BBC Southern Counties Radio talking about Houseparty. She has some Betamax tapes with editions of Houseparty on. Jean Orba, was the programme organiser of Houseparty and is still around reminiscing on the 70s show.