Now if there is a memory from the late 80’s that oozes nostalgia it has to be the Video Rental Shops. Remember visiting Blockbuster Video shops with there numerous walls of  VHS and Betamax tapes.

Also movies were often recorded off laserdisc in the back. Some shops had a Betamax section next to the Phillips video 2000 tapes. Can you remember the double sided video tapes as well.

Another memory in 80s Video Shops were the basket of ex-rental VHS videos.  Normally next to the massive pop corn and chocolate bars stood the basket along with a new stack of cheaper ex-rental tapes. 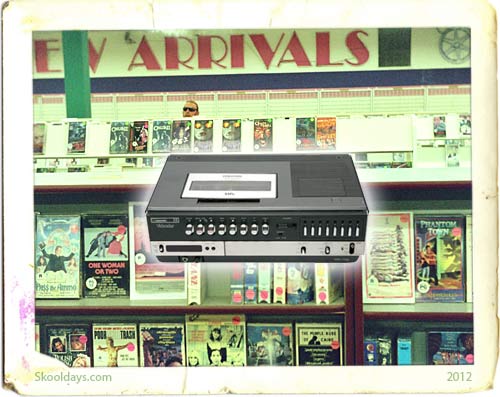 Some of the early independent shops were clearly pirating the tapes. With cheap, beige photocopied inserts and badly printed shop logos.

When you did rent a tape from the 80s Video Shops they were filled with trailers & commercials for upcoming VHS releases. Each video also featured several tacky “Blockbuster Video” promotions.

So do you remember your local 80s Video Shops in your street?