You are in: Home > Intellivision Video Game Console

Intellivison games were a real eighties icon released by Mattel in 1979. The graphics were awful but the game play was smart. So good that you can still purchase a retro gaming version today on Amazon

If you are an avid gaming fan then Intellivision was the console to dream of in the eighties.
Favourites included Super Pro basketball, Baseball, Space Armada, Space Hawk, Motocross, Space Battle, Shark! Shark!, Frog Bog, Carnival and Astrosmash 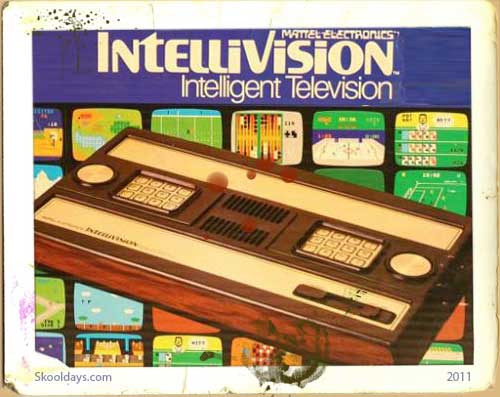 Intellivison was a top competitor to Atari in the early 80s. It was known to have revolutionary graphics for its time, but fewer game selections. It was soon surpassed by Colleco Vision and Atari 2.

Recent releases for the Apple Ipad have increased retro gamers enjoyment on some of the early games.

Development of the console began in 1978, less than a year after the introduction of its main competitor, the Atari 2600. The word intellivision is a portmanteau of “intelligent television”. Over 3 million Intellivision units were sold and a total of 125 games were released for the console.

Of course in the early days of Video Game Consoles the television was the only monitor available in the home.