You are in: Home > Breakfast at Tiffany’s : Retro Movies

In the early 1960’s a novel from 1958 was turned into a film that has lasted decades. The book was “Breakfast at Tiffany’s” and the movie kept the name.

Breakfast at Tiffany’s is the story of a woman making her way in the big city. The story isnt in any great depth but rich in characterization which may explain why its protagonist, Holly Golightly, has become Audrey Hepburn’s most memorable screen persona. In the hands of director Blake Edwards, the film neglects much of the book’s foreboding edge, but gains an unforgettable comedic touch which actually helps accentuate the darker moments. 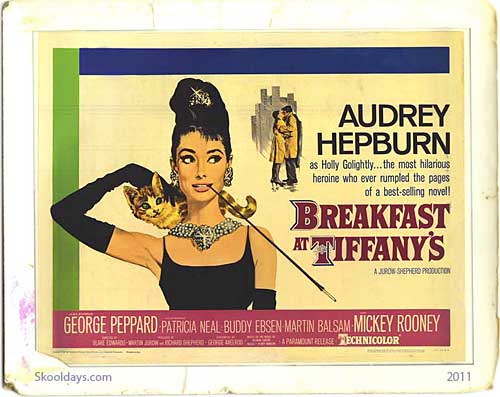 Breakfast at Tiffany’s is great entertainment and will be loved for generations to come. Famous for many movie themes such as the “Pink Panther”, Henry Mancini’s musical score and Hubert de Givenchy’s gowns for Ms. Hepburn successfully uphold Capote’s style when the story itself is forced to leave his writing behind. The movie is unusual, funny, thought provoking, serious, sophisticated and you could say it has a bitter sweet feel to it.

It truly lives up to 1960’s fashion too, so if you love the swinging sixties, you’ll love the atmosphere created within the sets and characters.