Charlton Heston as Judah Ben-Hur has to be one of my all time greats. This movie really hits all the right buttons, and its not just our opinion. In 1959 the 11 Oscars awarded to Bible Classic tale speaks volumes. 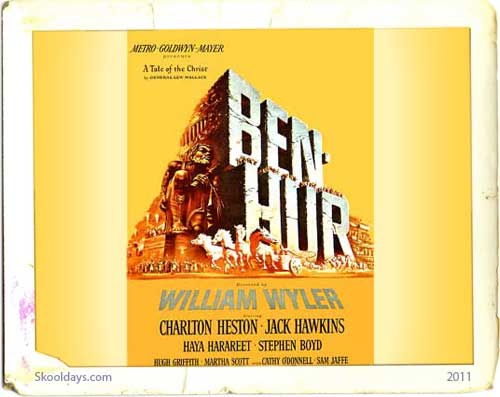 Critics claim that the 1959 Ben-Hur is arguably the greatest of all epics. Ben-Hur is a story of the friendship between two young boys. Eventually they grow up to be enemies and end up hating each other, one being Jewish and the other one Roman. The props and settings clearly show hours of research and the budget seemed to be endless in this 212 minute classic. This has been filmed 3 times and stands above the previous 2 by a mile.

One could easily assume “Ben-Hur” is a story from The Bible, and although this is not the case it was the intention when writing it as it wanted to realistically parrelel the time period. It claims and is one of the most powerful stories ever told.

Many elements were inspired and copied from the first two, filmed in 1907 and 1925, but with a vast improvement: special-effects. The props and filming wasn’t as lethal in the modern day color version because of the technical improvements made in the late 1950’s.
“Ben-Hur” was also known as “A Tale of the Christ” and is full of action and romance. There’s also a tension between the two leads that could be interpreted as a love-affair gone horribly wrong, but this was toned down by the studio.

No doubt with Gladiator being a big vox office hit it’s just a matter of time before this classic will have it’s forth making, for now we cherish the 1959 version.

12 Movies I Know You Have Never Seen at the Cinema!