You are in: Home > Adam and the Ants : Pop Music

Now returning to te pop scene again in 2011 it seems the Adam cant leave the pop scene and remarkably he is still getting great reviews. But he will be best known for his shooting to fame in the early eighties in the UK charts

In 1982 the BRIT Awards gave the Best selling album award to an unknown group: Adam and the Ants for the album “Kings of the Wild Frontier” 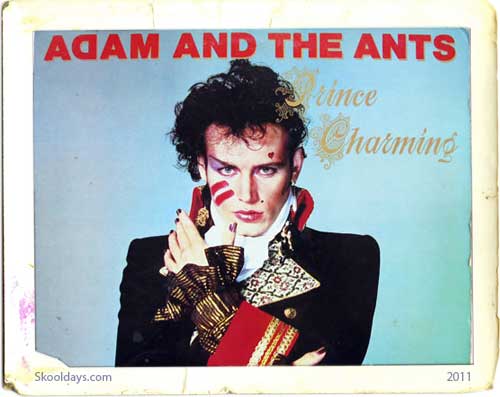 Prior to the Ants, Stuart Goddard who called himself Adam, played bass in pub rock group Bazooka Joe, now primarily known as the band that headlined when the Sex Pistols played their first concert on November 6, 1975, at Central Saint Martins College of Art and Design. After witnessing this Adam immediately quit the band with the intention of forming his own, inspired by the Sex Pistols, thus the ants were formed for Adam.

After a difficult time with band members forming another group “Bow-wow-wow” the albums followed such as Dirk Wears White Sox. Then commericially significant was the 2nd album “Kings of the Wild Frontier” including the hits Ant Music. The 3rd album was probably there most successful with “Prince Charming”. From that point on Adam started to gain such popularity that it was just a matter of time before the solo career took off.