You are in: Home > Corgi Cars

Corgi Cars
Corgi Toys is the name of a range of die-cast toy vehicles produced by Mettoy Playcraft Ltd. in the United Kingdom. The Mettoy company was founded in 1933 in Northampton, England
A market a range of toy vehicles was planned for the Corgi Toys company as competition to Meccano’s Dinky Toys model vehicles which had dominated the British market for many years.
Corgi Toys were introduced in the UK in July 1956 and were manufactured in Swansea, Wales, for 27 years before closure of the company in 1983. The range was exported worldwide and sold in large numbers. Some of the best known and most popular models were of cars made famous in film and television 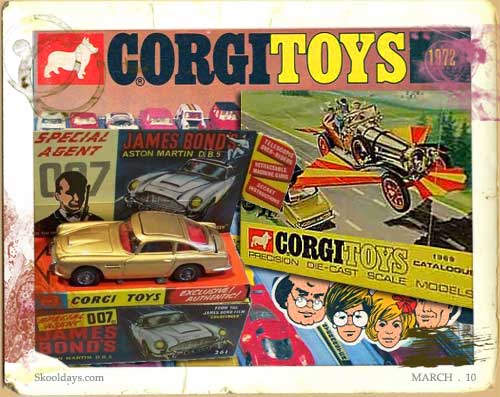 They knew that to copy the Dinky product range would not be enough to guarantee the success of the range. So, it was agreed that all the vehicles in the Corgi range would have windows. “The First with Windows” became one of the early selling slogans. December 1956 was the launch of the Corgi Model Club and a newsletter was published on a regular basis.

Corgi Toys Limited was formed on 29th March 1984 from the assets of the former Mettoy Company. The new company decided to concentrate its efforts on producing and selling high quality die cast models. At the time of purchase, Corgi was rated number two in the UK die cast market. In the first year, Corgi set about winning back the confidence of the toy trade. The company appointed consultants to create a new corporate image with new packaging, a new road wise logo and a revamped imaged.