One of the most iconic toys in any kids toy box has to be the iconic Batman TV Show Corgi Batmobile 1966 Model 267
It was a true competition to the other classics at the same time, including Chitty Chitty Bang Bang and the James Bond Aston Martin. Few kids could avoid taking notice of this beauty in the school playground with its gadgets galore. 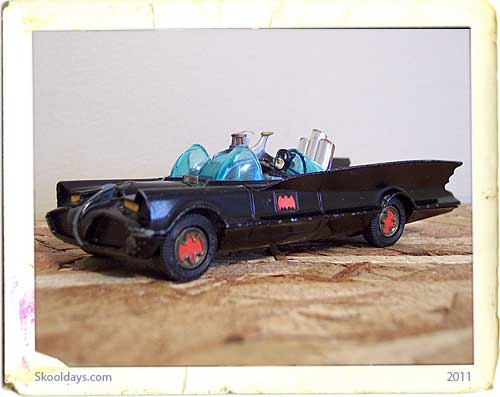 The Batmobile Model 267 was released in October 1966. This was a George Barris customised 1955 Lincoln Futura concept car from the American television series Batman and the Corgi model featured rocket launchers, pulsating red plastic ‘flames’ from the engine exhaust, an operational die-cast metal chain cutting blade in the nose of the car and models of ‘Batman’ and the boy-wonder ‘Robin’ sitting in the seats. The Batmobile went on to sell over five million examples staying in the range until March 1979, and was another huge success for the company.

The car featured rocket launchers, pulsating ‘flames’ from the jet engine exhaust, a chain cutting device and models of ‘Batman’ and the boy-wonder ‘Robin’ sitting in the car.

Another massive sales success for Corgi, the Batmobile went on to sell over five million examples in its lengthy life, staying in the range until the 1980s.