You are in: Home > Lee Presson and the Nails

Lee Presson and the Nails

Lee Presson and the Nails or LPN is a Goth swing big band that originated in the San Francisco Bay Area in October 1994.
The band differentiates itself from other bands of the late ’90s swing revival by their wacky stage antics and the sinister appearance of bandleader Lee Presson. 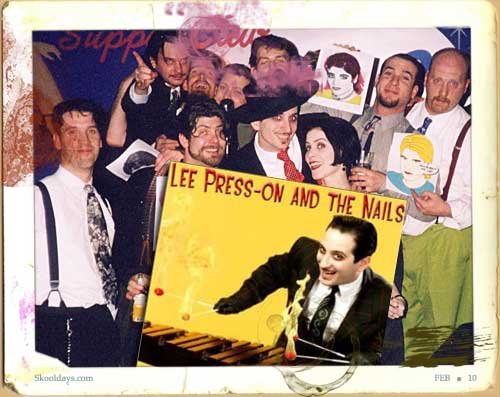 They won a California Music Award in 1998 for best Swing/Cabaret act and have released four CDs to date, three of which are still available. Lee Press on and the Nails disbanded temporarily when Lee Presson divorced his wife and moved to Hollywood. During that time Lee was the keyboard player for the Oingo Boingo tribute band Dead Man’s Party. After a two-year hiatus, Lee Presson and the
Nails performed a reunion show in San Francisco on 17 September 2006 at the DNA Lounge. After that they decided to get back together.

Amazing how popular they are from such small roots.