You are in: Home > Tin Toys

Tin Toys
A tin toy, or to be pedantic a tin lithograph toy, is a mechanical toy made out of tinplate and normally painted by chromolithography to resemble primarily a character or vehicle.
Tin toy robots are a highly collectable type of tin toy. Classics like the Mr Atomic Robot, and Robby the Robot from the movie Forbidden Planet can sell for several thousand pounds on eBay.
Tinplate was used in the manufacture of toys beginning in the mid 1800’s. The toys were made from thin sheets of steel plated with tin, hence the name tinplate. They were a cheap and durable substitute for wooden toys. The toys were originally assembled and painted by hand.  Though you can imagine that this was very time intensive 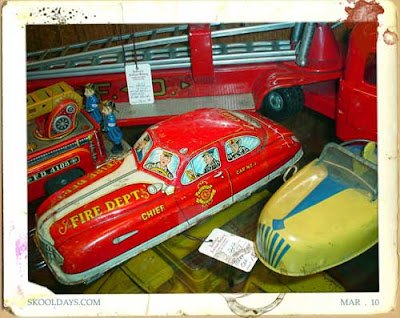 Germany was the major producer of tin toys in the world in the early 1900s.  Other countries soon took there lead with hundreds of thousands of these tin toys were being manufactured.
The World wars had a major effect on tin as it was an important commodity for the production of arms. After the war, tin toys were produced in large numbers in Japan.
So why did tin toys loose popularity in the 1960s?
Well with cheaper plastic and new government safety regulations the tin toys days were limited. Tin could slice fingers. Have poisonous paints to digest, and were costly to make, but boy they did look good!
Barney and Friends
Barney & Friends is an independent children’s television show produced in the United States, aimed at very young children ages 1–5. The series, which first aired in 1992, features the title character Barney, a purple Tyrannosaurus rex who conveys learning through songs and small dance routines with a friendly, optimistic attitude.

Despite being a carnivorous type dinosaur, Barney likes many different foods such as fruits and vegetables, but his main favourite is a peanut butter and jelly sandwich with a glass of milk.
Other characters include Baby Bop and Cousin Riff

Over the years, more than one hundred children have appeared as cast members on the show. Barney & Friends mostly get local talent which is in Texas.