You are in: Home > Mysteries of old Peking – The Chinese Detective Game

The Mysteries of Peking

was a game made by Milton Bradley in the eighties. It was designed for 2 − 6 players and was a type of mixture of Cluedo with 221b Baker street. I have to admit to totally forgetting this old game until recently being reminded by my sister, after much racking of my memory I suddenly realised it was this cracking little game.
The idea of the game is you are a Chinese detective trying to solve one of the various Peking mysteries. Each mystery is set out in a mystery book. To get clues to help reveal the culprit, you must go to the different locations on the board such as the Docks or the Laundry. While you are there you also question witnesses and they will provide clues such as whetheter they wore glasses or had a scar on their face. You also need to track down the “the Spy” and “the Wise Man”. Also you may move the dragons through certain fortune cookie cards, to prevent the other detectives to manage to get there before you. Once you’ve deduced who the culprit is you go to the relevent dragon (this was revealed by the visit to the Spy) 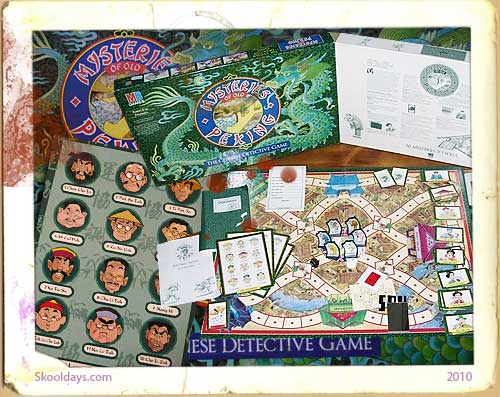 The game has particular air of excitement as it is full of little gadgets fro any young wannabe detective. The three tools are a mirror to look at the “wise man” clue which as a back to front clue, and a SPY card to decode the “Spy” clue, this in effect filters out the answer as does the a red filter to look at general clues.

The game came with a variety of names and had a wide distribution in various languages, for me it was a relatively long title “Mysteries of old Peking – The Chinese Detective Game” but a great little game for the detective in you.