You are in: Home > Slinky

Who remembers the Slinky?

Back in the 50s and 60s the Slink was a toy every kid was proud to have. Most remember the Slinky as a loose spring that can travel down stairways. Slinky wasn’t overly expensive and so was easily achievable for kid’s pocket money. 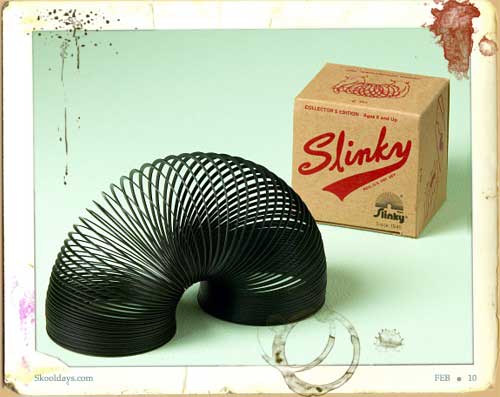 Richard James demonstrated it at a toy department in Philadelphia back in the 1940s. In 1946, Slinky was introduced at the American Toy Fair. The toy was a massive hit for the Mr. and Mrs. James. In 1998, Slinky was sold to Poof Products, Inc. Slinky became Pennsylvania’s official state toy. In its first 60 years Slinky has sold 300 million.

Anyone remember the Slinky toy commercial jingle in 1962.
It became the longest-running jingle in advertising history.

The Slinky was originally was made from steel. There are versions made from plastic. (not the same in my mind even if they do have a rainbow of colours)

It’s still available in the modern computer world we live. Though it may only be seen today in science and physics lessons rather than as a toy. Still the Slinky lives on.

Slinky – Blast from the past