You are in: Home > Weebles

Weebles wobble but they don’t fall down! Boy were they ugly little blighters! 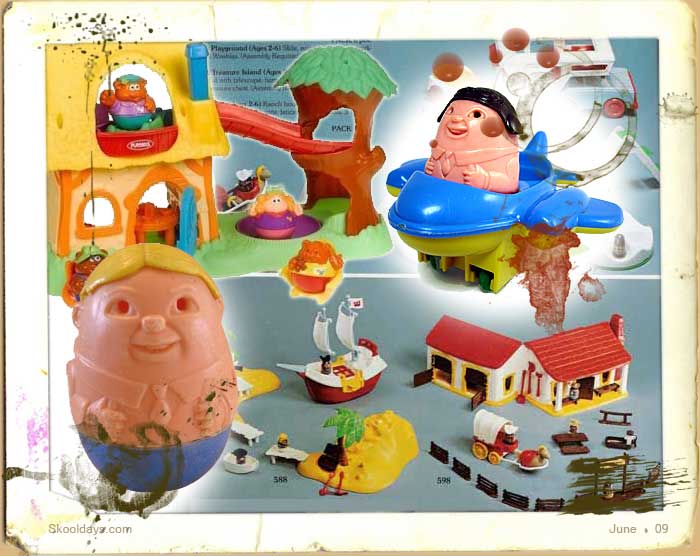 One of the benefits of having children is that you can unashamedly play with kids’ toys once again. My daughter’s have a fine collection of vintage Weebles (the old Airfix ones with the scary hollow faces) which has given me a perfect opportunity to start playing again. They’ve got all the extras too, like the Weebles bakery which has a little metal bell over the door that jangles when a customer wobbles in, a Weebles playground with slide, roundabout and swings and even a Weeble police van (for taking away bad Weebles).

Who can forget the Weeble treehouse and cottage followed? The Weebles popularity grew with the line. Soon the Weebles family had its own vehicles, a boat, a playground, train, airport and plane, a circus and a race-track. At the moment, the favourite game involves sending all the Weebles hurtling down the slide into a pile at the bottom, where they instantly spring back up on their ‘feet’, and then we arrest one of the bad Weebles for being a bit rough on the slide.

When Hasbro aquired Romper Room Inc. in 1969 the Weebles were on their way to Toy History. The Romper Room Show itself began in 1954 and was syndicated or franchised across America until the early seventies, when Weebles toys hit the marketplace.
The genesis of these little toys that wobbled but never fell down was actually the Romper Room Punching Clown.

The first version of the Weebles was a fatter, squatter family than most Weebles people remember. They were “peelable”, with the litho uncoverd and easily scraped. Within a year, the Weebles were improved and all new packages touted the Weebles as “Improved Peel Proof Weeble”. The original family was a dark-haired father with a red shirt or blue v-neck sweater, a blond-haired mother in a green dress, a boy in blue jeans and a white “W” tee, and a red haired girl with green pants. There was a brown family dog, too. A baby was soon added to this line-up; she was pink and held a blue balloon.

Anyone else grew up with weebles?