You are in: Home > Fuzzy felts

Fuzzy felts were family fun right from the 1950’s. With 40 squares and 30 circles in a variety of 4 colours yellow green red and blue, several basic shapes like flowers and tractors a boy and a girl, you could make millions of different pictures – as long as they included a tractor, a boy, a flower and a girl…mmm slightly limited then. 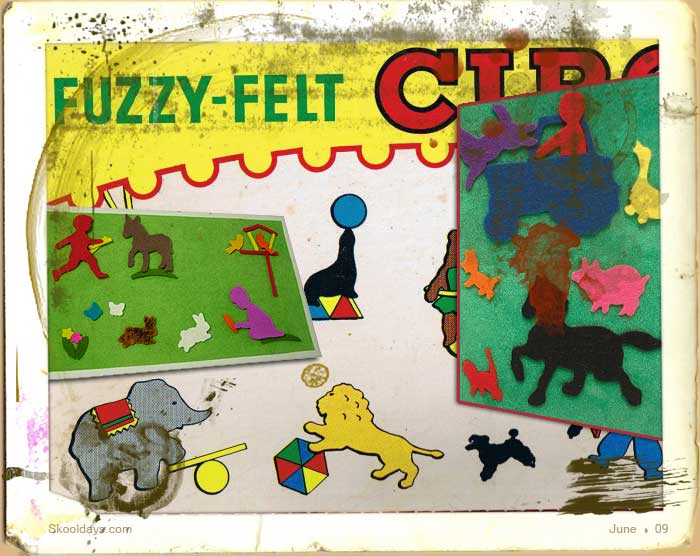 Not to worry there are hundreds more sets that dont have a tractor shape, like a set with flowers only.

It has to be said that they were harmless and encouraged creativity. Fuzzy Felts were one of the few toys that doesn’t require batteries, and secondly it can be played with time and time again, making its super eco-friendly.

The variety of fuzzy pieces of felt in assorted shapes, sizes and colours could all be arranged on a felt-covered board and as they were flet they stuck to the board to make a picture or pattern of your choice.

It must be stressed that imagination played a large part in this fuzzt felt craft, as they were only silhouettes.

How did it all start? Fuzzy Felt was accidently invented by Lois Allan during the Second World War. Lois was helping the war effort by cutting felt gaskets for tanks and other military vehicles in England, when she discovered the entertainment potential of the felt offcuts! So, what amounted to little more than a bunch of cheap cut-offs has become an iconic toy of our time. Of course the colours were slightly drab browns and greys at this point!

Themes have continued to be produced over the years farmyard theme, a ballet theme,the jungle, train station, even a bible stories theme.

This toy sold so well, over so many decades, quite incredible when it amounted to nothing more than a bunch of cheap gasket off-cuts.