You are in: Home > Kenner’s Show Projector

This was great except there was always kids in and out the broom cupboard disturbing the light of the projector. It was brilliant in theory and rubbish in practice but my my my it was seriously nostalgic reminiscing on it now. 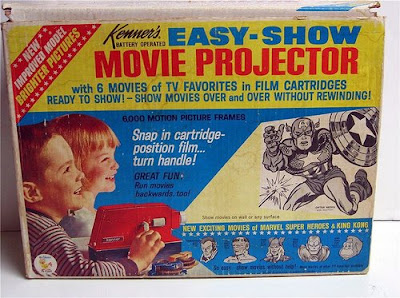 There were several versions available by the 1970’s. It was one of those toys that look like hours of fun on the TV advert but when you had one, it never really felt right. The premise of the Kenner toy was fun enough. You bought the basic set which was a projector (glorified flashlight is more like it!) and 112 35mm slides. Well, that’s actually 16 cartoon strips with 7 pictures on each. The way it worked was to run the slides through the projector onto the wall and enjoy the equivalent of a 4 square foot illuminated comic strip.
Like a lot of boomer toys, these projectors are fairly easy to find today and they are generally in working condition. Occasionally, the pin will be missing in the hinge of the handle but other than that, they made it through time in great shape. There is always a catch, though, and in this case, it’s the color slides. The slides are frequently scratched and warped.