You are in: Home > Striker by Parker

Palitoy Parker Striker Football Game now that was a great little game in the seventies. It was slightly different to table soccer and subbuteo as a push of the head enabled the leg to kick the ball mechanism gave it an extra edge. Though snapped legs and heads were always likely by the end of a long cup run! 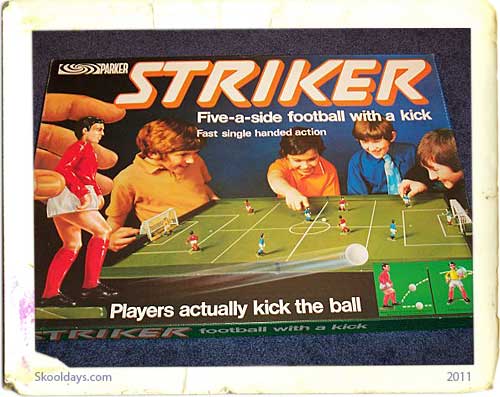 Striker by Parker was not quite Subbuteo

What was going on with this set, a kid wearing a tie in the picture of the box. He was clearly the manager and so was taking it far more serious than we ever did! Apparently there is a revival on in the last decade though I believe this has died again in recent months!

Striker was a simple table-top football game when compared with Subbuteo. It was probably aimed at a younger audience, and certainly requires less skill. It recreates five-a-side football on a pitch with a rebound wall. The players have one moveable leg controlled by a rod and spring inside the figure which attaches to the player’s head. Place the ball in the slot in the base, and then press the head down to propel the ball. The pitch is divided into sections, with one player in each section. If the ball finishes in a section controlled by one of your players, you can move that player to the ball, and then pass or shoot. If it finishes in the penalty area, the goalkeeper throws it back into play. It’s that simple. The goal is slightly bigger than a standard Subbuteo goal, and the ball is much smaller – it is actually in scale with the players. 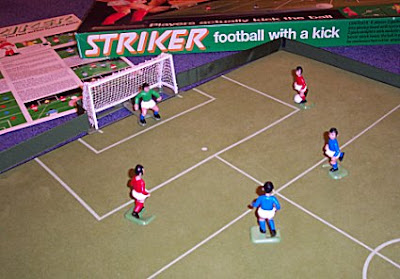 The goalie himself was in a crouching stance, with his legs apart. The handle ended in a crescent to support his feet. It was possible to prevent a goal by trapping the ball in the spot between the ‘keeper’s feet. The top half of the goalkeeper rotated stiffly (using a rubber band). One arm was positioned to hold the ball, and the rotation was used to throw the ball into play. 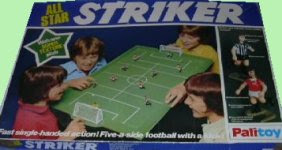 Overall Striker was a great game for memories, but not a touch on Subbuteo.

7 thoughts on “Striker by Parker”