You are in: Home > Pink Panther Show

The first season of “The Pink Panther Show” ran on NBC from 1969 to 1970 and came over to the UK. It was a top cartoon in it’s day as it had attitude and appealed to adults and kids.

Who can forget the amazing car that kid had. I really wasn’t interested on the elephant, tiger or rhinoceroses. The kids playing volley ball or going down a slide. I just wanted that pink car!

The opening sequence showed a boy driving what a believe was called the Panthermobile from the countryside to Grauman’s Chinese Theatre in Hollywood.

It was only when I visited Hollywood 30 years later and the Chinese Theatre it then occurred to me – ah the very place the Pink Panther was dropped off. No Panthermobile car though! 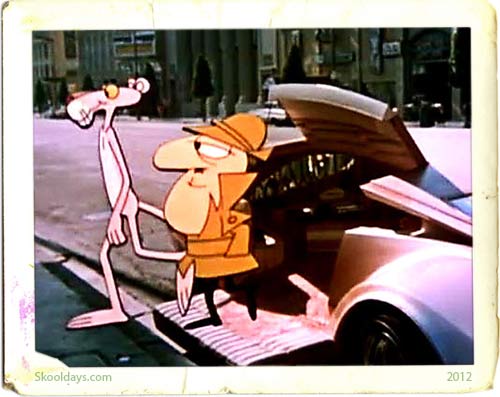 Think of all the animals you ever heard about
Like rhinoceroses and tigers, cats and mink
There are lots of funny animals in all this world
But have you ever seen a panther that is pink?
Think! A panther that is positively pink!

Well here he is, the Pink Panther
The Pink Panther
Ev’rybody loves a panther that’s pink
He really is a groovy cat
And he’s a gentleman, a scholar, he’s a acrobat

The New Pink Panther Show (1971-1974) aired the same half-hour format of the show, but with The Inspector replaced by The Ant and the Aardvark, and a new opening/closing sequence and theme song. Some Pink Panther cartoons were repeated from the previous shows.

Another series aired afterwards under the same title of The Pink Panther Show, but mirroring the format as The New Pink Panther Show. Some Pink Panther shorts were broadcast for the first time, while older entries were repeated. Bumpers featuring The Inspector and the Ant and the Aardvark connected the three entries.

The All New Pink Panther Show (1978-1980) was a new series that commenced after NBC cancelled the long-running Pink Panther Show (1969-1978). ABC-TV picked up the series, and requested 32 brand new made-for-television Pink Panther shorts, along with 16 entries for the new Crazylegs Crane segment. A newly recorded theme song was featured during the opening and closing credits, and no bumpers were produced