You are in: Home > Four Sight

Back in the 1975 everyone had an idea of what life would be like in the year 2000. Silver jackets, food in the form of tablets and games with a twist to keep you from being board as the robots carry out all the chores of the day! – Get real! Four sight by Invicta who also brought us the classic Mastermind games, promised Four Sight is supposedly one of the games. 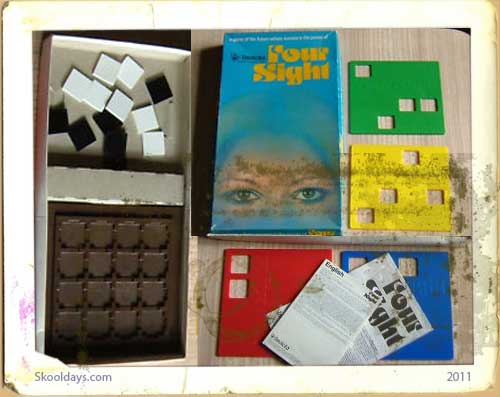 The game can be quite different as you can turn your key plate around and use it in any of its four orientations. For real game geeks the rules included two further game play options, which add further dimensions and complexity to the game.

Four Sight claimed in 1975 to be the “GAME OF THE FUTURE WHERE SUCCESS IS THE POWER.” Not quite but a good try.