You are in: Home > Carry On Screaming

1966 Carry On Screaming, was a marriage of everything British at the right time in the right place with the right storyline and cast. Unusually many of the Carry on team weren’t used in which is arguably the best Carry On film made by far. It has an atmosphere that stays throughout along with a superb soundtrack through out the movie. I believe it was made in the same studious as the Hammer House production team which probably explains why it was so well put together with such apt costumes and sets. 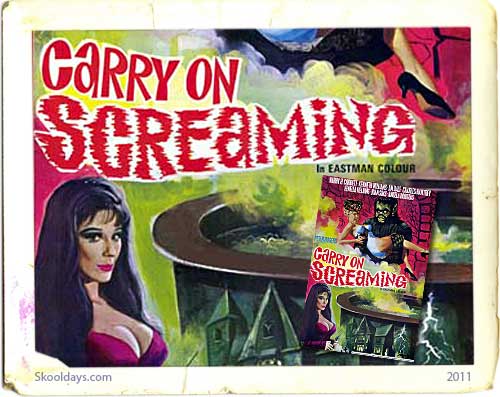 Fenella Fielding is perfectly cast seductress. The film also has some good makeup work, and the title song, stays in your head.
The cast for once didnt include Sid James nor Barabara Windsor nor Hattie Jacques or Kenneth Connor.

Two London policemen played by Peter Butterworth and Harry H Corbett investigating the reports on missing bodies in a nearby woods. In nearby Watts mansion owned by a brother and sister played by Kenneth Williams and Fenella Fielding, we realise they are running a manequin business by capturing bodies and frying them in wax. They send out there own laboratory creation Oddbod into the woods to find and bring back young girls which they cover in plaster and sell to shops as dummy’s.

Detective Constable Slobotham played by Peter Butterworth,is set up mas bate – dressed as a woman (to trap the creature). Also featured are Jim Dale, Joan Sims and Bernard Bresslaw and Charles Hawtry. There is a cameo appearance by Jon Pertwee.