You are in: Home > Treasure Ahoy!

Treasure Ahoy! This rare little game from Arrows Games was made in the early seventies and aimed at 2 to 4 players. We loved playing it and with better marketing this could of been a mainstream game like Waddingtons Buccaneer. 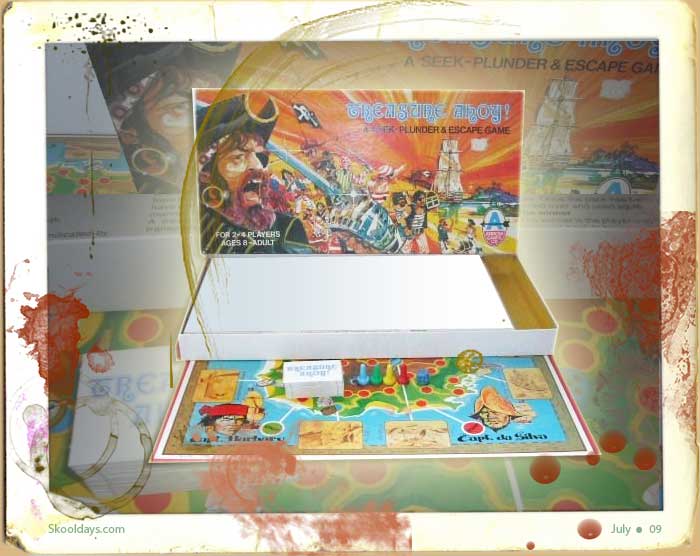 The contents consist of a board depicting a tropical island and you are a Pirate on the island represented by one of four coloured pawns. Their was also a die, and a set of cards representing various adventure equipment such as compass, map, cutlass, etc. Four of the cards depict treasure. At the start of the game, the four treasures and six other cards are shuffled together and placed on each of the ten ‘hiding places’ on the island, and an additional three cards are dealt to each player. On his turn, the player can choose to either discard a card and draw a replacement, or roll the die and move his pawn. He can only move onto a blue hiding place by discarding the appropriate equipment card for that location, but doing so entitles him to look at the card placed there and, if desired, exchange it with one from his hand. However, to take away a treasure card an additional piece of equipment must be expended; a key for a treasure chest, a spade for buried treasure. At the end of his turn, the player refreshes back to three cards.

Once a treasure card has been procured, the player will need to get it back aboard his ship. To do this he must return to his start square and play a boat card to get the booty aboard. Until he achieves this, he runs the risk of losing it to another player landing on the same square and playing a ‘plunder’ card. The game ends when all four treasures have been secured offshore and the player who has the most is the winner.

Did anyone else remember this great game?